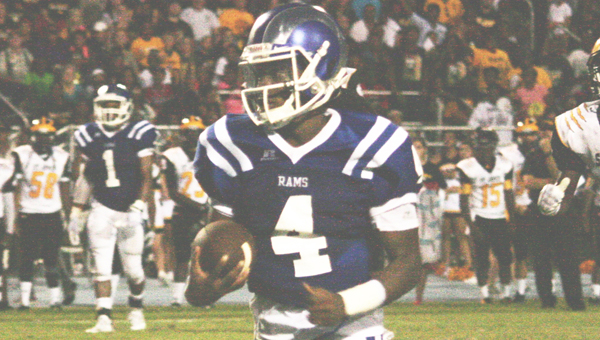 WSJ quarterback Jemoine Green, No. 4, takes off for a long run versus St. James. (Kyle Barnett/L’OBSERVATEUR)

LAPLACE — With week one of the football season done and gone the parish has a combined record of 2-2.

The St. Charles Catholic Comets dominated every phase of the season opener versus the Thibodaux Tigers.

Despite facing a much larger opponent in the 5A Thibodaux, St. Charles Catholic, a 2A program, did not relent all night.

At running back the Comets put on a clinic with Eric Lewis running in two touchdowns. Tahj Smith led the team with 12 rushes for 56 yards and caught a touchdown pass, and Justin Loupe led the team in receiving with two catches for 65 yards and a touchdown.

“They are not ready for superstardom, but they played hard-nosed football and that is all we can ask them to do this early in he season,” head coach Frank Monica said.

However, the scoring drives did not start until the second quarter, which Monica said was a bit slow for him.

“We didn’t see that coming at all,” Monica said. “We played kind of sluggish and got off to a slow start. We fumbled the ball away inside the two in the first quarter and got a big play called back.”

It was not until the second half that the Comets put three more touchdowns on the scoreboard.

“We’ve stressed all summer on being more of a second half team, and I think they responded to that,” Monica said.

The Comets defense shutout Thibodaux all night limiting them to 42 plays in comparison to St. Charles’ 70 plays. That was the deciding factor, according to Monica.

“We had a number of three-and-outs and that was really, really big when you play against a spread, no huddle team.”

The West St. John Rams came out to an early 12-0 lead in the first half against the St. James Wildcats and held for a 12-6 win.

“It is indescribable,” Walters said. “I just want to keep winning. I appreciate the guys and all the effort they put out. Those guys really fought and believe in what we are doing. I am looking forward to the rest of the season.”

The passing game was not the only part of the offense that was clicking. Ross’ first touchdown reception came on the heels of a 45-yard run by tailback Lamore Boudoin and was just one of a string of long runs Boudoin put in throughout the night.

On defense the Rams were dominant much of the game, keeping pressure on Wildcats quarterback DeMarcus Williams, forcing four turnovers and shutting out St. James’ offense for the game. While Williams hooked up with wide receiver Aaron McKenny for an 89-yard touchdown pass with just two minutes to play in the first half, it was called back on a holding call.

Williams was hard pressed to overcome a strong pass rush led by Rams senior defensive end Dauntae Gaudia that saw the Wildcats quarterback suffer a number of hits and take a few sacks.

A last ditch effort to tie the game up saw St. James convert a few pivotal third-and-longs and a fourth-and-long off of a late hit. But the Wildcats’ comeback attempt fell short when Kie’Ave Harry came down with an interception and a long return to end the game.

Riverside Academy had its hands full with a much larger opponent in John Ehret Friday night.

The Rebels go off to a slow start, falling behind 22-7 by the time halftime rolled around.

After preparing to have sophomore quarterback Jared Butler start for the team throughout the summer and into the preseason, the Rebels opted to put senior wide receiver Herb McGee under center for the season opener.

“We started off slow offensively in the first half and couldn’t get anything going,” Riverside head coach Bill Stubbs said. “We had a lot of three-and-outs.”

The Rebels only points of the first half came off of an interception return for a touchdown by senior linebacker Evan Veron. However, the Rebels offense caught fire in the second half.

The Rebels put up a touchdown on the first drive of the second half with a 50 plus yard screen pass to Jeremy Gibson. Riverside’s running backs would score two more unanswered touchdowns to capture the lead 28-22.

The Rebels failed in their own fake punt attempt, giving the Patriots a short field to work with, John Ehret scored the go ahead touchdown to make the score 29-28.

Stubbs said the loss is a learning experience.

“They were some things here and there that we need to pick up and we learned,” Stubbs said. “But I will say defensively our kids played hard. They are a good football team, and we just came up short. Guess what? If you don’t like the feeling don’t let it happen again.”

The Wildcats fell behind the Eagles early 17-0, giving up big plays to Eagles running back Trey Ragas.

Da’Monte Coxie found the end zone on a short pass he took in from 64 yards out, but that play was called back on a hold by the Wildcats. The negated touchdown was just one of a few plays the Wildcats had called back on penalties.

“We’ve got to quit killing ourselves with mistakes,” Foster said. “This is a good football team, and we are not as bad as we played.”

It was not until the last play of the first half that the Wildcats were able to score off a pass in the corner of the end zone from quarterback Alvin Jackson to wide receiver C.J. Turner to narrow the score to 17-6. But that is as close as the Wildcats would get.

In the second half, the Eagles extended their lead to 38-6.

It was not until the fourth quarter and after Jackson left with a dislocated finger that the Wildcats scored again.

It was not until waning minute the game in the fourth quarter and not until the Wildcats saw a position change at quarterback with Jackson gong out with a dislocated finger that the Wildcats scored again.

Coxie took over at quarterback for the remainder of the game.

In the Wildcats last drive Coxie took a snap and rambled for a weaving and winding 80-yard touchdown off a quarterback keeper to narrow the score to 38-14, with a two-point conversion on a sweep by wide receiver C.J. Turner to bring the score to 38-14.

“We worked (Coxie at quarterback) this week, just trying to get a different look,” ESJ head coach Alden Foster said. “He is just a special kid, wherever you get him the ball he is going to make plays.”

Foster said his team executed poorly in the game and he knows they can play better.