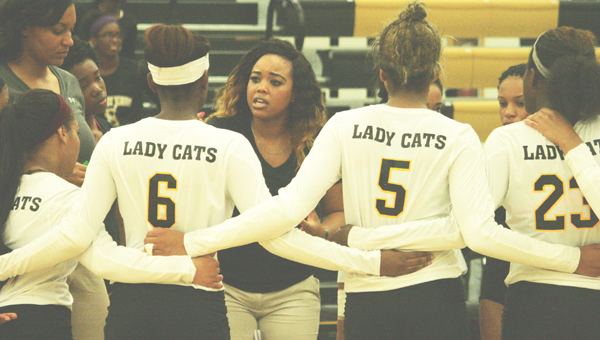 LAPLACE — The first week of prep volleyball has concluded and the results are a mixed bag for the four St. John the Baptist Parish high school teams.

East St. John has the best record in the parish thus far at 1-1. In her first year as head coach of the Wildcats, Chelsey Lucas-Nicholas is attempting to turn the program around.

In its first match of the season, ESJ got off to a strong start in a win against Warren Easton, but fell Thursday to Northlake Christian.

Lucas-Nicholas said while her team has a lot of work to do, she feels the players have been taking positive steps.

Of the team’s six starters, four are either sophomores or freshmen.

“I’ve got a lot of young girls who have basically never played volleyball before,” Lucas-Nicholas said. “It is coming together.”

Still, players like Jessica Scioneaux have been turning heads. Scioneaux had 20 assists, one ace and one dig against Northlake Christian.

With only a few small fixes, Lucas-Nicholas said she feels the Wildcats will soon be able to compete with the better teams in the state.

“I just feel it is going to be a new ESJ volleyball team, a new school, new coach, new team — you are definitely gong to see a big difference in these girls in contrast to years before,” Lucas-Nicholas said. “It is going be a good game to come to every single time you dress up on the court. I am excited about the season. They are excited.”

Over at Riverside Academy, former Loyola University head coach Margot Frederick is into her first year in charge of the Rebels.

In taking on tough competition, the Rebels have gone 1-2 in the first week of the season. On Tuesday, the opening day of the season, Riverside lost 0-3 to Ben Franklin despite racking up 28 aces.

Riverside came back on Wednesday and defeated East Jefferson 3-0 with a big performance by sophomore Sydney Joseph who had 16 kills.

“That was a really strong performance for her,” Frederick said.

The Rebels could not keep the momentum going though and fell to Ursuline Academy Thursday.

“We did not play our best,” Frederick said. “We were playing a really good team. They were semifinalists a year ago. They had everybody back. I knew it was gong to be a challenge and I thought we did some good things at times, but they run a great offense.”

While the first part of the season has been up and down, Frederick said the schedule was stacked with tough competition on purpose in order to challenge her players.

“I think our offense needs to start to click a little bit more and we need to work on hitting the different areas with a little more tempo, a little more heat,” Frederick said. “We need to hit the ball harder.”

Down the road in LaPlace, St. Charles Catholic is also off to a 1-2 start with its sole win of the season coming 3-0 Tuesday against cross-parish rival West St. John.

The Comets lost 3-2 to Ponchatoula on Wednesday and 3-2 against Terrebonne Thursday. Despite being greatly outsized by Ponchatoula and Terrebonne, both 5A programs, St. Charles Catholic head coach Meghan Ericksen said her players kept themselves in each match taking them to the final set.

“The only thing we have to work at is finishing,” Ericksen said. “Those are some pretty minor adjustments with our own mistakes. I don’t see the teams we’ve lost to as beating us. I think we’ve let them win. They won because or our mistakes. They didn’t win because they beat us.”

Despite finding her team with a losing record early on, Ericksen is pleased with how her team is playing together.

“Overall, I think they are doing an excellent job and progressing so much. I am excited to see what the rest of the season has in store,” Ericksen said.

In particular, Ericksen pointed out the play of senior libero Alyssa Arceneaux.

“She is all over the court,” Ericksen said. ‘She follows the ball wherever it goes and when it comes close to the ground she is right there next to it trying to get it. She is just a hustler.”

Across the river, the West St. John Rams have gone 0-2 to start off the season. Most recently they lost to Madison Prep 2-3.

“We lost the first two sets and then we dropped three in a row,” first year head coach Joshua Bellair said. “After the first two sets we became very unfocused as a team and we just made a lot of mental errors. I don’t know if we just got tired or not. We didn’t deal well with what they were giving us”

For the season opener, West St. John opened at home with a 3-0 loss to St. Charles Catholic.

While going winless in the beginning of the season is not ideal, Bellair said his team is dedicated to turning things around.

“It has been a rough first week,” Bellair said. “We are going to try and pull together. The main thing we have to do is stay together as a team. We can’t start pointing fingers and playing the blame game.”

Bellair said he is emboldened by the play of freshman Amyiya Lumar.

“She has been playing really well for us in the back row and front row,” Bellair said. “Of all of our players she is going to be very good.”

West St. John will get a long break before next traveling to Belaire for their next match 5 p.m. Tuesday, Sept. 15 in Baton Rouge.

In the meantime, Bellair said his team will be focused on improving their fundamentals.

“We are going to have really hard days of practice next week,” Bellair said. “We are going to try to get in some really good work at practice, show up as a team and really improve on our effort.”

Barnett: They can’t all be winners