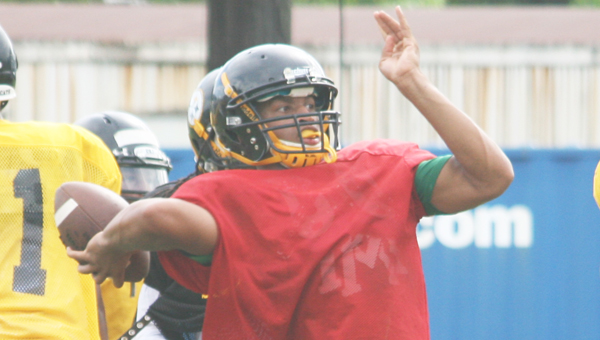 Marquise Darensbourg draws back his arm to pass during a summer practice. (Kyle Barnett/L’OBSERVATEUR)

Darensbourg was a standout as a sophomore in 2014 for Destrehan going 14-0 as the team’s starter leading up to a 5A state championship appearance and was expected to challenge for the starting quarterback position this season at East St. John after he transferred this spring.

Shortly after Darensbourg’s transfer, an anonymous complaint to the LHSAA began an investigation to determine if Darensbourg’s move from Destrehan to East St. John was motivated by athletics. As a result of the investigation, LHSAA Executive Director Eddie Bonine ruled Darensbourg ineligible for the season.

However, on an East St. John appeal, the LHSAA’s executive committee ruled Darensbourg is eligible to begin participating in athletics Oct. 1, just in time for East St. John’s toughest stretch of the season, when they will take on district foes Thibodaux, Destrehan and Hahnville in back-to-back-to-back games.

According to East St. John head coach Alden Foster, Darensbourg was able to produce proof he was living in LaPlace since at least Oct. 1, 2014, this meeting LHSAA rules regarding residence requirements.

“The more we presented the case, the more they listened and the more it shifted,” Foster said. “Their rules state once he has been living with a parent for one calendar year they are eligible after one calendar year. So that was the rule they couldn’t deny.”

Foster called the decision a triumph for the Darensbourg family.

“Marquise and his family didn’t do anything illegal or that broke the rules, even though somebody saw it that way,” Foster said. “Of course we would love to have him for week one, but he gets to come in Oct. 1 and play six games out of the 10, and that is better than nothing. Just thank God this kid gets to play most of his junior year.”

Senior Alvin Jackson has been named the Wildcats starting quarterback, and it is unclear if Darensbourg will take over the position when he is eligible to play.

In the meantime, Foster said East St. John will be throw Darensbourg into full game practice and indicated he will play in some aspect of the offense in the Thibodaux game Oct. 2.

Marquise Darensbourg’s father, Malcolm Darensbourg, said his family was ecstatic when they were told Marquise would be able to play in 2015.

For Malcolm Darensbourg, he felt the situation was damaging his entire family.

“When people told me he wasn’t going to be able to play it was breaking me down,” he said. “It really was because there was nothing I could do about it.”

Malcolm Darensbourg said it was difficult for him to see his son unable to pursue his interests in life due to an anonymous complaint.

“I felt like I just wanted to see (Marquise) happy,” Malcolm Darensbourg said. “It wasn’t anymore about football, about Destrehan. It wasn’t about me or his mother, it was about none of that. I felt God was with him throughout this whole deal. That made me not feel bitter about the situation.”

Darensbourg’s successful appeal came only a day after former East St. John cornerback Dontrell Allen was denied a hardship transfer to East Jefferson. Allen, a Mississippi State commit, who was set on playing pivotal roles for East St. John on offense and defense, moved to East Jefferson’s district only two weeks before the football season was set to begin.

Allen appealed to the LHSAA claiming homelessness, but the organization ruled him ineligible.

“I don’t know what (Allen) is going to do,” Foster said. “I don’t know if he is going to come back. He is welcome. The kid was given some bad advice and influenced in a very wrong way. I knew he was going to be ineligible. It is sad you would jeopardize this kid’s senior year.”