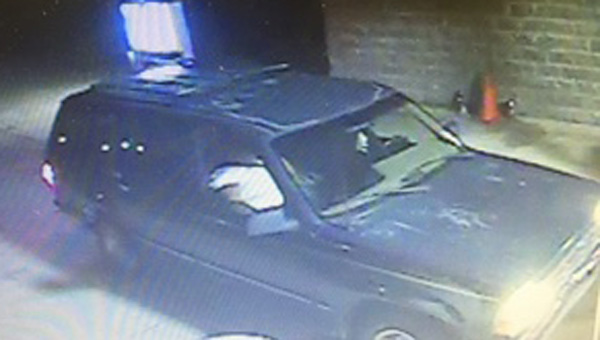 Authorities said the man in the video is shown just before midnight Aug. 28 pulling up to a coin machine in a dark-colored, late-model Ford Explorer pictured at left.

LAPLACE — A man was caught on camera Aug. 28, breaking into a car wash coin machine in St. John the Baptist Parish.

Sheriff’s Office investigators are asking for the public’s identifying the man who looked directly into a surveillance camera, of which footage was made public by authorities.

Sheriff Mike Tregre said the man in the video is shown just before midnight pulling up to a coin machine in a dark-colored, late-model Ford Explorer. The suspect looks around before using what looks like a monkey wrench to pry open the machine.

The suspect appears to be a clean-shaven, possibly bald black man wearing a dark-colored shirt. The video can be seen at lobservateur.com and on the newspaper’s Facebook page.

Authorities said Friday morning they were not releasing the location of the crime or details pertaining to the suspect’s possible link to other area break-ins.

Anyone who can identify the man in the video or has information regarding the burglary is encouraged to call the Sheriff’s Office TIPS line at 985-359-TIPS or Crimestoppers at 504-822-1111. Residents who call Crimestoppers do not have to testify and may qualify for a cash reward.