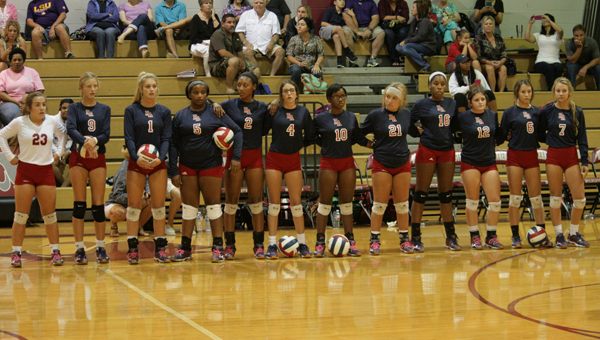 The Riverside volleyball team stands before their jamboree at Destrehan. (Kyle Barnett/L’OBSERVATEUR)

LAPLACE — St John the Baptist Parish high schools are seeing a major turnover in leadership of their volleyball programs this season.

Of the four varsity coaches in the parish, three are new this year.

St. Charles Catholic is the only school returning its head volleyball coach this year in Meghan Ericksen.

Ericksen led the Comets to a 13-18 season last year with a second round playoff loss. Ericksen said coming into the 2015 season, her players need to come together and lean on their experience in order to win.

“We have a lot of returning varsity starters this year. That should be our strong point,” Ericksen said. “Competing as a team and communicating are our strengths.”

One of the things the Comets will be working on in particular is stamina. In last week’s jamboree, the Comets faced off against Lutcher, one of the best teams in the state, and split the match 1-2, leading early before suffering the loss. Frederick said her girls came with a good start but faded.

“We are going to try and be more of a technical team,” Ericksen said. “Last year we were more of a scrappy team with it being my first year and trying to get everybody together. With six returning starters on varsity, we are really trying to work them into playing more as a team and hitting the court better.”

While not new to the parish, head volleyball coach Chelsey Lucas-Nicholas was named head coach at East St. John for the 2015 season.

Lucas-Nicholas spent the past three years at Riverside, where she led the Rebels to two semi-final appearances before turning in a quarterfinal playoff finish last year. Now at East St. John, Nicholas inherits a program that missed the playoffs last year with a losing record.

Lucas-Nicholas said while the girls on her team lack fundamental skills, they have the athleticism to go far.

“It is a group of girls you are going to be able to see jump, throw high, but just right now we need to get all of the skills and the IQ level higher,” Lucas-Nicholas said. “Once we increase the IQ level it is going to be a team that makes history. Once we get the volleyball IQ up everything is going to keep peaking and going higher and higher and we’ll see more wins.”

Leading up to Tuesday’s season opener against Warren Easton, building basic technique will remain a goal.

“They really didn’t have anything to feed them to get better,” Lucas-Nicholas said. “So we have bee going through the whole summer practicing on and off and just them coming into the gym by themselves. Being dedicated and going to workouts, that makes a difference when you see that.”

At Riverside Academy, Margo Frederick takes over for Nicholas. Frederick is the former head volleyball coach for Loyola University.

Frederick says she hopes to give her players a good experience. The team, while young, has the ability to do well, Frederick said, adding she thinks her coaching style will help.

“I think the biggest thing is a culture change. I want the kids to feel comfortable with the staff and really enjoy playing volleyball,” Frederick said. ‘I don’t want it to be a stressful situation for them.”

However, Frederick said, for underclassmen, which comprise most of the team, will have to step up if Riverside expects to continue it’s legacy of success.

“I have eighth graders playing varsity and a senior who is only in her second year of volleyball,” Frederick said.

“We need them to get comfortable on the floor together.”

Riverside will open the season Tuesday at Ben Franklin.

At West St. John, assistant girls basketball coach Joshua Bellair takes over the Rams volleyball program. The Rams have seen success over the past few years under the leadership of former head coach Glenda Mattos, who stepped down earlier this year but remains with the school.

“I am new to them and they are new to me,” Bellair said. “It is just trying to get accustomed to each other right now.”

Not coming from a volleyball background Bellair said it has been a challenge to take over the team.

“There is definitely a learning curve,” Bellair said.

“I am learning as I am teaching them and they are learning as well. It is a process I am going through right now. My approach is I lean on the people around me who know more than me.”

However, Bellair said he anticipates his team will have continued success.

“Win, lose or draw as long as we put our best foot forward that is the most I can ask from them,” Bellair said.