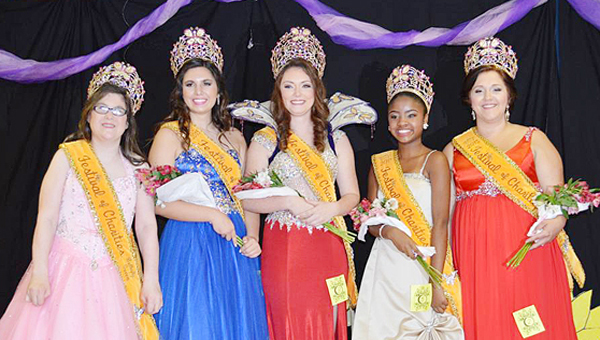 The theme of the annual pageant was, “The Sisterhood of the Traveling Crowns.” Over 80 visiting queens from across the state attended. The event included a special dedication to Mya Marie Zimmer, Miss Festival of Charities 2014 who recently passed away from Cystic Fibrosis.

Savannah Loupe of Paulina was named 2015 Miss Festival of Charities Queen IX. She also received the Fashion and Photogenic Awards. The First Runner Up, People’s Choice and Sweetness award winner was Carli Lambert, and the Second Runner Up was Sydney Poche.

In the Teen Division, Rachel Marino of Norco was named Teen Miss Festival of Charities Queen IX and received the Photogenic and Fashion awards. The First Runner Up and People’s Choice winner was Alyson Louque. The Second Runner Up and Sweetness winner was Emily Loupe.

Ms. Festival of Charities is Renée Pollet Buchanon of Paulina. She also received the People’s Choice and Fashion Awards. The First Runner Up and Photogenic award winner was Jessica Richard Bilyeu.

Lecy Marie Cazalot, daughter of Al and Duane Cazalot of Destrehan is the Butterfly Queen.

Directors of the organization are Denise Lirette and Nancy Whann, Committee Members are Duanne Cazalot and Stacie Falgout.

The Festival of Charities Queens travels each weekend across Louisiana to the many fairs and festivals representing the organization, the Down Syndrome Association of Greater New Orleans and other charitable organizations promoting education and awareness of acceptance.

One of their biggest events is helping with the DSAGNO Buddy Walk at Zephyr Field. FOC is a fun- filled service organization; their queens, families, directors and committee members volunteer with events throughout the state, sharing their mission statement that everyone is special.