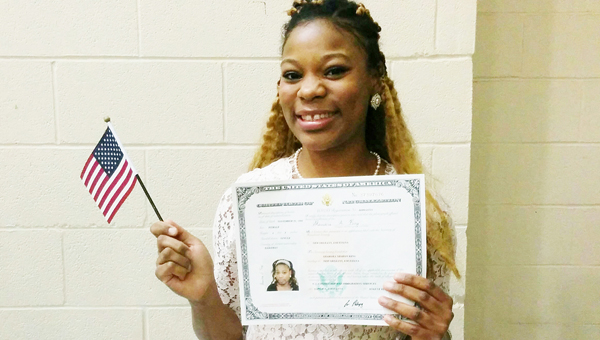 Shamara King was one of 150 people who raised their right hand Wednesday, took the Oath of Allegiance and became an American citizen.

LAPLACE — Deciding to become an American citizen is a momentous one and for some the process is long, but is worthwhile.

Shamara King was one of 150 people who raised their right hand Wednesday, took the Oath of Allegiance and became an American citizen.

At the ceremony, held at the St. John the Baptist Community Center, soon-to-be citizens were given a packet with a copy of the Pledge of Allegiance, a pamphlet on voting, a copy of the Constitution, a small American flag and information on how to apply for a passport.

“I’ve waited a long time for this,” King said.

Originally from the Bahamas, King has lived the past ten years in the U.S. but when her green card expired, she decided to take the step to become a citizen.

“I’ve enjoyed it and I loved this country,” King said. “There are a lot of opportunities and advantages here that will help me further myself in life.”

For King, the process to become a citizen was a long one.

“The process was excruciating,” King said. “In the beginning there were so many documents and I didn’t even have my original birth certificate.”

Once King returned to the Bahamas and got her original birth certificate things seemed to go a little bit smoother.

To become a U.S. citizen applicants must learn about the U.S. and prove they know the material.

“I had to study a 100 questions and vocabulary about U.S. history for my interview with American officials,” King said.

After the interview comes the written exam. A week later King received a letter saying she had passed.

For some becoming an American citizen isn’t just so they can have a better life, but so their children can too.

Erizama Loera Martinez was born in Mexico and married an American citizen. She wanted the best for her family so she decided to become a citizen herself.

“It’s important because we have a family,” Martinez said. “We want to give them a good quality of life. We need a good government to protect our rights.”

For Martinez the process to citizen wasn’t very hard.

“Its easy when you having everything in order,” Martinez said. “I am very happy with the process.”

As part of the process, Martinez had to prove she was married in good faith, lived with her husband and had a family.

Martinez said she had been looking forward to this day for a long time.