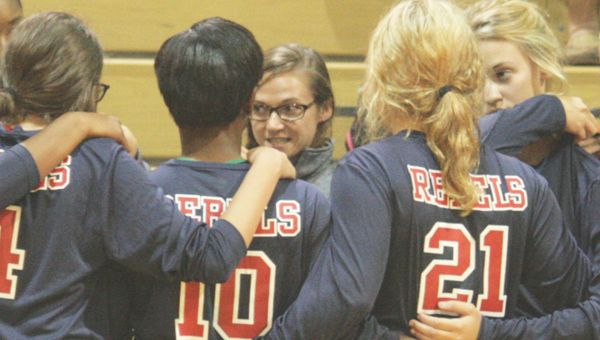 Though the Rebels are coming off a playoff appearance last year, they are in rebuilding mode this season with limited experience on the team.

The Rebels dropped matches to Lutcher 0-2 and Destrehan 1-2, but Frederick said her girls gained valuable experience on the court.

“We were overwhelmed by the scenario,” Frederick said. “I have eighth graders playing varsity and a senior who is only in her second year of volleyball. It served its purpose. We needed to get comfortable on the floor together.”

Frederick said while she would have preferred a win, that was not the ultimate goal of the scrimmage.

“That was a little bit disappointing,” Frederick said. “We got stuck in one rotation and I didn’t call a timeout because I wanted them to have to work through it. I tried several different lineups and got some different people on the floor to get them some experience. We made some adjustments on the coaching side. If we play them again, will we win? You never know.”

The scrimmage allowed Frederick to further define the Rebels game plan going into the season.

“I tend to base it on what kind of players we have,” Frederick said. “We are small, athletic and quick and want to play fast and want to really value the first contact on side. So it is going to be our serving and our passing that are important to our success.”

This is Frederick’s first time coaching a high school team in seven years. A native of Ohio, Frederick moved to the New Orleans area in 2013 to serve as head coach for Loyola University’s volleyball program. Prior to coaching for Loyola, Frederick was an assistant coach at the NCAA Division I, University of Texas-Pan American. Frederick also saw stops at Muskingum University and Illinois State University, where she began her college coaching career.

In 2014 Frederick took a position at Riverside Academy as counselor, where she also coached middle school girls before being promoted to head coach at the high school level this season.

“For me it is refreshing to get back to a higher level — to get back to thinking about the game tactically instead of just teaching them basics,” Frederick said. “Coming from college to what we have now — I came to Riverside because there were a lot of advantages. We have a strength and conditioning program that I didn’t even have at Loyola.”

Frederick said it is a change of pace to be part of a school that puts so much emphasis on athletics.

For Frederick, the skills and life lessons learned in volleyball transcend the court.

“We have really been talking about becoming a better person and teaching core values,” Frederick said. “I think it gives them a sense of being part of something bigger than themselves. Finding a way to value the team over yourself and prioritize things — it is a process of being part of a team. You are not always going to be at your best, but you are still going to have to work. With our kids we just want them to be relentless in pursuit of whatever goal they have. Whether it is in class, on court or wherever it may be, they can’t be denied and have to keep working for it.”

Barnett: Only one chance to be a kid