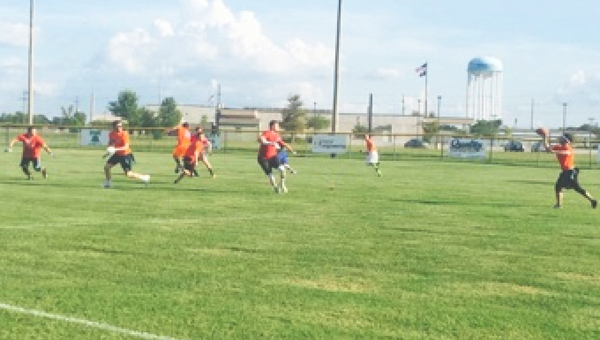 Participants in the Parks and Recreation 6-on-6 flag football league face off every Wednesday at Regala Park in Reserve.

RESERVE — As a teen Bobby Smith used to play football for the Riverside Academy Rebels, now he plays for the Goodfellas against teams with names like Lousianimals, Misfits, Bloodhounds and 2 Legit, amongst others.

Now 28-years-old, the Garyville resident has not strapped on the pads, outside of playing one year of club football at the University of New Orleans, for years. Instead, Smith has maintained his passion for the game by participating in adult flag football leagues.

Smith, a crane operator for Turn Services, said many times there is nothing better than getting back out on the field after a long, hard day at work.

“It is a great stress reliever,” Smith said. “If you are having bad day or something, at least for that hour you can go run around and have some fun.”

Smith is one of the co-founders of the St. John the Baptist Parish Parks and Recreations Department’s first flag football league that began play in mid July.

Each Wednesday night from 6 to 9 p.m. adults from across the region flood into Regala Park in Reserve to blow off some steam. The field includes some former high school or college players looking to relive their glory days, others with some experience and newcomers looking to learn the game.

For the current season, the league is comprised of nine teams playing each other 6-on-6, made up of around 100 players in all with four refereed games occurring every Wednesday.

“We usually have a big crowd watching,” Smith said.

The nine-week regular season will be followed up by a two-week playoff and then the championship game at the end of September.

The league was the brainchild of Goodfellas teammates Smith and LaPlace resident Jeff Deville.

The two are longtime flag football enthusiasts who traveled outside the parish to play for years before approaching new Parks and Recreation Director Kerry Watkins.

“We have been playing flag football for about six years,” Smith said. “We had a league in Kenner. There was no league from Paulina to Destrehan.”

Watkins, himself a former football star who played for the Montreal Alouettes in the Canadian Football league for eight years, was receptive to the idea.

“You would be amazed at how many people look forward to being out there,” Watkins said. “We’ve never had flag football before. This is something new that we are introducing and it took off. People have been asking for it and sitting there and waiting and we finally delivered.”

Watkins himself used to play in flag football leagues throughout the area in the CFL offseason but has stayed off the field so far.

“I want to play,” Watkins said.

“I get asked every week. ‘Hey, go get your cleats!’ I just try to manage the program. I don’t want to get involved like that. But I still get the itch.”

While it is too late to sign up for this flag football season, the program is expected to be year round.

“We are going to take a break for a couple of weeks and then start it up again,” Watkins said.

Flag football is just one of the offerings of the Parks and Recreation’s new adult sports lineup in which grown-ups are given the chance to compete at area parks with paid officials refereeing the games.

Adult softball started this week and is accepting new teams until Tuesday.

“The registration is $300 per team,” Watkins said. “That is really cheap because everyone else is paying $400 or $500. We are trying not to turn anyone down. If we can accommodate them, we are going to.”

Parks and Recreation also looking forward to starting an adult basketball league, but has not yet finalized plans.

Watkins said the focus on adult sports offerings is part of a new tact Parks and Recreation is taking.

“It is important to get adults involved in recreation as well because it’s the same adults who have kids participating in our programs,” Watkins said. “If the whole family is participating, it is kind of like a country club — you are always a member of the club. That is what we are trying to get at, to make recreation a big family and a big organization so that we have something for the entire family to participate in.”

Those who would like to sign up for adult sports leagues can do so by calling 985-652-9569 or emailing recreation@sjbparish.com.