Blitz hits up sex offenders: Authorities fan out to 60 locations 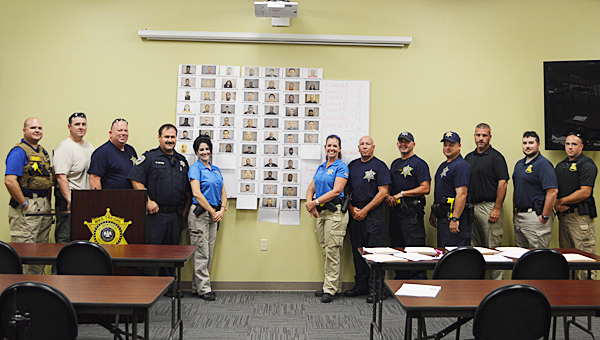 Authorities stand in front of a board that maps out their targets for the Sheriff’s Office sex offender blitz.

Lt. Gordon Jeffcoat heads the division, which twice a year blitzes the parish in an effort to verify the location and documentation of the area’s registered sex offenders.

The most recent blitz occurred Tuesday evening, when six two-deputy teams were joined by three Probation and Parole officers who helped canvass the parish.

Authorities confirmed a department print out with each offender’s name, picture and all pertinent information, including vehicle and identification card numbers.

Sex offenders not up to date with their registration face arrest.

“If they have a vehicle, we actually see the vehicle, verify the plate number and look at their ID card,” Jeffcoat said. “Cards, whether an ID or driver’s license, should say sex offender.

“If they work, we verify they are still working where they say they are working. Once we do that, on the back of the form, they sign that all the information is correct.”

Of the dozen sex offenders not personally contacted during the blitz, Jeffcoat said 10 contacted the Sheriff’s Office this week to confirm their information and two were reported to no longer live at those locations.

Jeffcoat said the department is confirming those reports, adding those sex offenders face arrest for not registering their change of address.

Following Tuesday’s check, Kirk Noel of Mt. Airy was arrested for failure to register or notify as a sex offender and failure to pay the sex offender annual registration fee. His listed address is on Chestnut Street.

Located on the Sheriff’s Office website – stjohnsheriff.org – is a “Citizen’s Services” tab, which contains a “Sex Offender Search” option.

Web users who seek out this page can search for sex offenders in their area or sign up for email alerts that provide regular updates on when a sex offender moves into the neighborhood.

Jeffcoat said sex offenders must register with his office at least once a year.

“We take a new photo of them,” he said. “They have to sign paperwork. We update them on any of the laws that changed.”

Sgt. Denise Bertrand, who works in the division, said it is important for parents and caregivers to register their addresses on the Sheriff’s Office website, adding those interested can register as many addresses as they want.