Barnett: A lot to come yet from young state swim champ 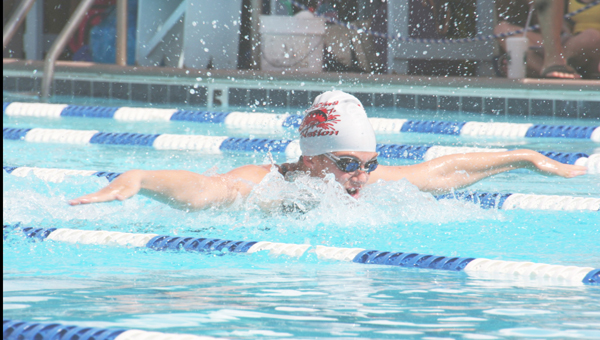 Emily Schexnayder swam at the 2015 Louisiana State Championships on July 16 where she won the 50 meter freeestyle and finished in third place.

At only 11-years-old LaPlace resident Emily Schexnayder has already accomplished a lot.

The old saying is that if you want to be successful you need to find something you love to do and become the best at it. It appears Emily, although still at a young age, is doing just that.

In addition to a mantle full of trophies, the St. Joan of Arc student has five thick binders full of medals, ribbons and newspaper clippings that, when stacked on top of one other, equal nearly half her height. These are awards and memorabilia attesting to her achievements as a swimmer.

Emily Schexnayder surrounded by a few of her numerous awards. (Kyle Barnett/L’OBSERVATEUR)

Yet Emily is not boastful of her accomplishments. She is polite to the extreme peppering her speech with niceties, answering questions with “yes sir” and “no sir.”

Emily has been at it since she was 5-years-old, swimming first for LARAYO and then Crescent City Swim Club of New Orleans as well as participating on her school team at St. Joan of Arc.

Her father, Kent Schexnayder, said he first started taking Emily to LARAYO because he played baseball there as a child. While Emily first started playing softball in addition to swimming it was not long before it was all about swimming.

“We couldn’t get her out of the pool,” Kent said.

Five days a week Emily works out in the pool, constantly honing her abilities as a swimmer, preparing for the next competition, doggedly setting goals for herself and, overall, just having fun.

Her time was only .08 seconds better than her nearest competitor. That means something as simple as diving into the pool the wrong way, making an errant stroke or a bad turn could have turned the race another way.

In addition to winning the 50 meter freestyle, Emily placed second or third place in most other events she swam in despite being on the younger end of the age bracket. It was enough to earn her third place amongst girls aged 11 to 12 years old for the entire state.

To get to the state championships Emily had to excel at an earlier invitational meet. As always, she had a goal in mind.

“Her goal was to break records,” Anita said. “So she sat down with her dad and looked at the ones where she had a shot.”

Then Emily started working towards those goals.

“I kept on pushing practice even more each week,” Emily said.

This will be the last stop for Emily this year — the 11 and 12 year-old age bracket does not have a national competition — that will have to wait for future years. But Emily already has those goals in mind.

“She is extremely talented,” Falati said. “She is a hard worker, has a great attitude and she is well motivated. Those are four qualities that you need to be successful in anything. We have some pretty high expectations for her and are looking forward to see what she can accomplish.”

Anyone with a seat in the audience should be happy to see what goals Emily sets for herself next, how she meets them and how she applies her mentality of success to other aspects of her life as she grows into an adult.