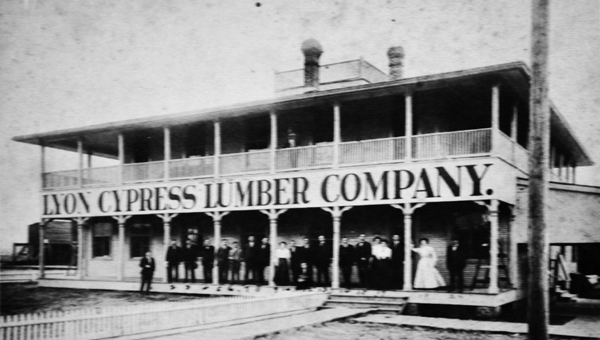 The Lyon Cypress Lumber Company was attracted to the forest of cypress trees and bought Glencoe Plantation, giving birth to a thriving lumber business and the town of Garyville.

GARYVILLE — At the turn of the 20th Century, agricultural plantations lined the banks of the Mississippi River in St. John the Baptist Parish. In 1903, the Lyon Lumber Company from Chicago was attracted to the forest of cypress trees and bought Glencoe Plantation, giving birth to a thriving lumber business and the town of Garyville.

“Named for the first president of the company, John Gary, Garyville was planned in a grid layout,” local historian Carl Monica said. “It was designed as a small urban community.”

Beginning with Main Street (presently known as Historic Main Street), the community fanned out to streets bustling with offices, company housing, a post office, various shops, a school and the Magnolia Hotel.

Garyville’s growth soon included the Gary Bank, and next to it, the first movie theater in the parish.

In the rear of the timber mill, a 20-acre pond was dug. The pond was used to float the timber, including a 1,300-year-old cypress — the oldest tree processed in Louisiana — to the mill.

“The Lyon Cypress Lumber Company provided 1,000 jobs,” Monica said. “It drew families from the surrounding areas and immigrants who had arrived in New Orleans, including my own Sicilian ancestors.”

The company also built the Garyville Northern Rail Road, approximately located where Louisiana 54 lies today, which extended 35 miles north to Livingston, another town built by the lumber company. The railway proved to be more than a method of transporting lumber, as it also served as a passenger train and was used to deliver mail.

Author Judy Creekmore, in her book “Celebrating 200 Years of River Parishes’ History,” wrote of the lumber industry: “By 1914 Louisiana led the nation in lumber production and much of the timber was harvested and milled in the River Parishes.”

With the depletion of cypress, the Lyon Lumber company moved farther north to process pine and other wood. The dwindling supply of timber, two fires and the Great Depression eventually closed the doors of the lumber company less than 30 years after it began.

Garyville’s rich history is one Monica hopes to maintain.

“Its future is its past,” explained Monica.

His vision for his hometown includes the preservation of historic buildings, including the Gary State Bank and the original lumber office, presently slated for the Timbermill Museum.

“I’d also like to see a bike trail trace the route of the GNRR from Garyville to Livingston,” Monica said.

Although the railroad was dismantled after the Depression, some of the rail bed is still in the swamp. One building significant in Garyville’s history, The Bank on Historic Front Street, fills weekly with music during Thursday Night Jams, beginning at 7 p.m. every Thursday.

The free event features much of the local talent from Garyville’s annual Sings and Strings Festival, as well as musicians from the surrounding area.

Another annual event for the town is the Fourth of July fireworks show in the Square next to the original church rectory, built in 1907.

Present-day activities set against backdrops from the past continue to keep the history of Garyville alive for generations to come.