St. John digs in for $2M in parks & recreation upgrades slated for completion by January 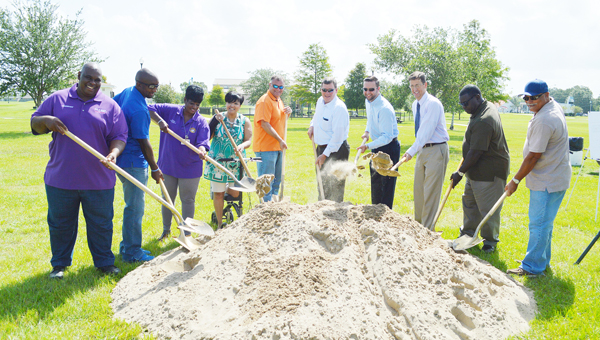 St. John the Baptist Parish stakeholders take part in the ceremonial ground breaking in July 2015, kicking off $2 million in parks and recreation upgrades.

LAPLACE — Over $2 million in enhancements to parks and recreational spaces all over the St. John the Baptist Parish are underway, as a ground breaking ceremony was held Wednesday for the parish’s Recreation Improvements Project.

A new ADA accessible play set with softile surface, new swing set with safety surface, new safety surface for the three existing play sets and a new fitness station are in the works for Greenwood Park, while Cambridge Park is set to receive several additions, including a new gazebo, new bathroom building, fitness station and softile play surface for the existing play set.

Emily C. Watkins Park will be upgraded with a fitness station and a new play set with softile surface, while the Peavine Boat Launch will receive an asphalt parking lot.

Parish Council Chairman Michael Wright said the project’s upgrades improve the infrastructure of the parish, and serve as an investment into area youth.

Dupre said, weather permitting, the upgrades would be completed by January.

In December the St. John Parish Finance Committee approved a $229,118 agreement between parish administration and Meyer Engineers Ltd. for the design, construction, administration and inspection services of the over $2 million in improvements to parish parks, playgrounds and recreation facilities recommended in the 2013 Parks Master Plan.

The Parks Master Plan was completed by Meyer Engineers and includes upgrades, repairs and improvements to each park and the proposed costs for each project. Over 40 projects, all funded through the 2014 bond issue, are included in the plan.

The Parks Master Plan, which includes the complete list of upgrades slated for the future, can be viewed at sjbparish.com by clicking on “Government” and then “Parks and Recreation.”

Robottom said Monday this round of improvements would add to the quality of life for parish youth, adults and seniors.

“There are many, many more projects in the Master Plan,” Robottom said. “As we get more money, we will complete them.”

She said in 2012 parish voters approved the first millage in parish history to support parish-wide recreation, and subsequently that millage has generated close to $1 million annually for general operations and maintenance of existing facilities and staffing.

Passage of a bond issue in 2013 meant $3 million was dedicated to parks and recreation, Robottom said, adding $2.3 million will go toward improvements identified in the Parks Master Plan from 2013, with an additional $300,000 going toward completion of the Mississippi River Trail and the Timbermill Trail.

Robottom encouraged residents to do their part in keeping the parks and public spaces clean, and to report any vandalism.

“Each time we have to go back and fix something that was damaged, it’s less money we have to do new things,” she said.

Jeremy Landry of LA Contracting Enterprise LLC, the project contractor, said the improvements to the recreation program are something parish residents should be proud of.

SCLTC students gets charged at camp