Wildcats in rebuilding mode under Foster 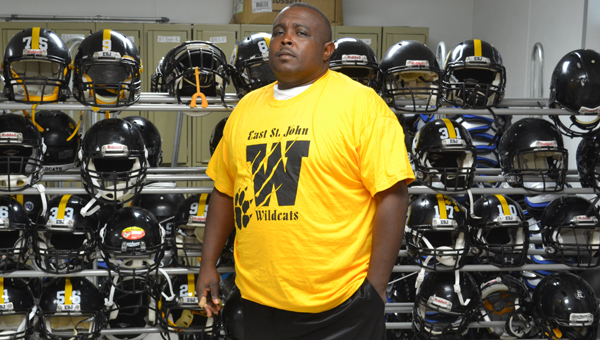 New East St. John head football coach and athletic director Alden Foster stood in front of his players who were lifting 45-pound weights above their heads, stepping onto benches and back down, over and  over again.

The effort on display is a testament to the work ethic Foster is instilling in his new team over the summer program.

Prior to joining 5A East St. John, the 42-year-old Foster was the head coach of Amite High School for seven years, a program he led to the two runner up appearances in the 3A state championship and to the playoffs all but one year he was at its helm.

Foster said while he has changed schools his approach to summer conditioning has stayed the same. The summer program has team members lifting weights and studying formations and schemes four hours a day Monday through Thursday week-in and week-out until the team heads off to an intensive overnight camp in Lumberton, Miss., on July 30.

“I’m just doing what I’ve done everywhere I’ve been and have been successful with,” he said.

Foster is now looking to transfer that same winning mentality and success now that he is in charge at East St. John.

“I want to instill my philosophy as a staff and as a team,” Foster said. “We are going to play physical football and let the chips fall where they may — physically disciplined football, give the fans something to be proud of and say ‘Hey that is East St. John, that is my Wildcats!’ That is my expectation, that is my goal.”

Last year saw the Wildcats finish 6-6 under former head coach Phillip Banko before falling to district rival Destrehan in a regional playoff appearance. Over the past few years the Wildcats have posted middling records, but managed to squeak into the playoffs largely based on the potent offensive talents of quarterback Xavier Lewis, who will be suiting up for LSU this fall, and running back Nigel Anderson, who joined the Green Wave football team at Tulane University.

This year Foster finds himself in a rebuilding situation. It is not enough that he is a new coach coming in to the new school, but he is facing a massive turnover in his starting lineup on offense and defense, with only four returning starters out of 22 positions.

In addition to turnover in the roster, Foster’s  players are faced with learning a new playbook and schemes for the Wildcats on offense and defense.

If all of that were not enough, it is literally a rebuilding year as well, as the football program prepares to move back to East St. John High School three years after the campus was flooded during Hurricane Isaac. Foster is looking forward to the change and the new state-of-the-art facilities, and feels it alone will give his team a boost.

The team will have to wait until they are well into August before any full pads work can commence and coaches can better gauge each player’s skill level. Although up until that time, Foster said he intends on getting his players as prepared as possible.

“You can simulate it, but until you put on those pads, there is nothing like the real thing,” he said.

While East St. John is Foster’s fourth school where he has served  as head coach, he is hopeful it may be his last. Already nearly two decades years into his career, Foster is far from retirement, but is hoping for a long run at  East St. John.

“I am not the type to just bounce around. This is year 19 for me. I don’t plan on going anywhere,” he said. “With some success from the kids — I think we have a great class coming in — I feel this is a place I can leave a positive legacy.”