Giving Back: Dredge digs in; comes out clean 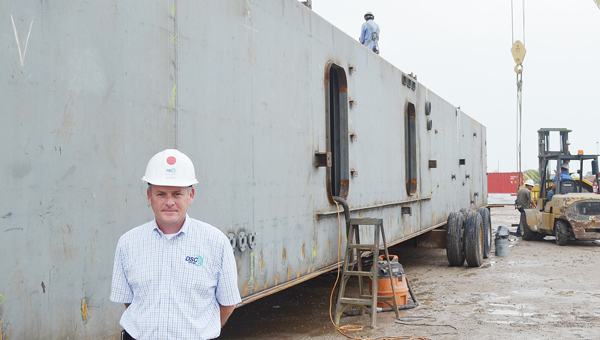 DSC Dredge President and CEO Bob Wetta is shown in front of a North Carolina DOT Shark Dredge, which is under construction at the Reserve facility.

Louisiana Economic Development recognized the Reserve business with a Lantern Award, which saluted the global leader in portable dredging for demonstrating excellence in manufacturing and outstanding service to the community through the involvement of its businesses and employees.

“It offers an opportunity for young kids wanting to possibly get into the field of design and drafting,” Wetta said. “It is also important so we can hopefully get some local talent out of that pool. We are trying to provide resources to be able to do that.

“We all know no one wants to leave Louisiana in general. We try to be competitive on our wages and keep the family atmosphere. We do a lot of outings with full families.”

Riverside recently completed its third year offering the drafting classes as an elective.

Drafting instructor Gabriel Lacombe said the drafting classes cost just under $10,000 to start up and credited Pellerin Milnor Corporation and Dredge for donating the funds and equipment to make it possible.

It’s that type of community commitment that inspired Parish President Natalie Robottom to nominate the company for the Lantern Award.

Robottom said the award recognizes the growth and prosperity of small businesses while also lauding their positive community impact.

“We are truly pleased to have you and your company in our parish and applaud you on your employment growth and facility expansion,” Robottom said in remarks about the company during their recognition ceremony last month at the Governor’s Mansion.

Dredge has operated as a locally owned, family business since 1989, developing a dominant role in the dredge manufacturing industry.

Wetta said the company moved from LaPlace to Reserve in 1990 and has expanded steadily since.

Outside of its corporate office and manufacturing facility on Airport Road in Reserve, which employs approximately 90 people, Dredge also has locations in Poplarville, Miss., and Greenbush, Mich., employing another 60 workers.

The company operates as a manufacturer of custom dredges and dredging equipment built for sale to the specifications of clients.

“We’ve expanded our global reach,” Wetta said. “For example, in 2014 about 70 percent of our sales were exported out of the country. We’re known for high-quality equipment.

“As a custom manufacturer, we kind of like the weird, wild and freaky projects that everyone else is afraid to do. There is a decent market for that.”

Wetta said the company is eyeing the possibility of controlled growth in the future, largely depending on what the market dictates is warranted.

If they did expand, Wetta said the growth would take place on their Reserve property on Airport Road.

According to Wetta, the company has sold three dredges to interests in Siberia, as well as to groups in Madagascar, Chile, Africa, South America and Canada.

“We’re not as active in Europe,” he said. “Europe and especially the Netherlands are kind of a dredging Mecca, so it is kind of hard for us to compete in there. We’ve also done some stuff in Asia. We have sold into 45 countries on five continents.”

Since Louisiana Economic Development launched the Lantern Awards in 1979, the program has recognized nearly 300 manufacturing businesses.

Award winners receive lanterns handcrafted and donated by Bevolo Gas & Electric Lights of New Orleans. The lanterns have become an internationally recognized trademark of New Orleans, and Bevolo is the oldest and largest copper gas lantern manufacturer in the U.S. and the second-oldest in the world.

“It is typical for awards such as these to be presented to large companies; however, it is an honor to be recognized and appreciated for our efforts as a small business,” Wetta said. “A special thanks also goes to all of the employees at DSC Dredge who put forth the effort day in and day out to make these awards achievable.”