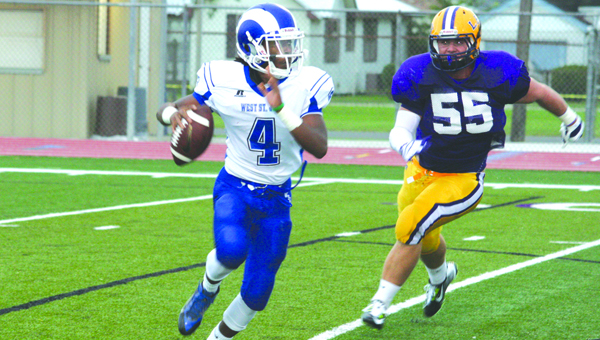 GONZALES — West St. John has established a tradition of stellar play in 7-on-7 tournament action over the past few years, and the Rams have already ensured that 2015 will only throw more fuel on that fire.

The Rams competed at the Adidas/Airo 7v7 State Tournament over the weekend and finished fourth out of 30 competing teams, officially qualifying for the Airo 7v7 Regional Championship next month in Valdosta, Georgia. That tourney will be contested  July 17-18.

West St. John went 4-0 in pool play on the first day of the state tournament to advance to bracket play on day two.

“It’s big for us,” West St. John coach Robert Valdez said. “To be able to go out there and face that level of competition … we have about 200 kids in our whole school.

“We don’t have the chance to pick our team from a pool of 1,000 boys. To be one of the final four teams standing, along with teams like McDonogh No. 35, John Ehret, Landry-Walker, it’s very satisfying.

“Our kids deserve it. They’ve been working extremely hard.”

While advancing to the regional brings the Rams program more notoriety, the on-field benefits can’t be understated. West St. John will be led by second-year passer Jemoine Green in the fall, and the passing tourney success indicates he may indeed be ready to take a leap in productivity.

“Our game is about speed, and everyone knows it,” Valdez said. “For a second-year quarterback and leader like Jemoine is, it’s great to see him have this kind of success. We need him to play well.”

Lamore Boudoin was among the offensive keys in the tournament. The running back has shown great versatility and has made a big impact as a pass-catcher, something that will only serve the team well this fall.

“He’s having a great summer,” Valdez said. “He’s been catching the ball so well and that gives us a lot of flexibility.”

Defensively, Kie’Ave Harry and Nicholas Borne are among those who have excelled while playing in space, as 7-on-7 play requires.

“Playing in these tournaments allows you to face so many different schemes and a lot of different, talented personnel,” Valdez said. “We want to compete. Our coaches have done a great job preparing our guys and our players are playing with a lot of pride.”