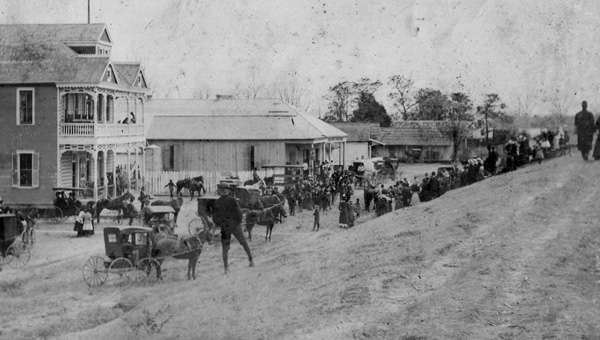 Social life along the river flourished in Reserve after the new levee was built.

LAPLACE — Hugging the twists and turns of the Mighty Mississippi, the levee silently guards the land as it steers the muddy waters south and prevents rising water from flooding our properties. The embankment seen today is far different from the ones of years past, but so is the river.

Far left, convicts work on the Crevasse in Reserve.

“The Mississippi River was only about one-half as wide as it is now,” Dr. Gerald Keller, a local historian, said.

The fertile land along the river and access to water for irrigation and transportation made the area desirable for farmland. To protect their investments, early settlers built and maintained levees along their property but were unable to stop the crevasses and levee breaches, which occurred several times throughout the history of St. John the Baptist Parish.

In 1821, the Poche Crevasse in Edgard flooded the entire west side of St. John. In addition to the homes and farmland the water engulfed, it swept away the parish’s first church, St. John the Baptist, built in 1771.

The East Bank was the site of another crevasse when, in 1849, a break in the levee at Bonnet Carre (west of the present spillway) became 7,000 feet wide and flowed for six months, destroying crops and property.

Only when the water had subsided was the levee repaired.

Again in 1872, the Mississippi sought to change its course through a crevasse in the levee at Bonnet Carre.

“The Mississippi flowed to Lake Pontchartrain for 11 years,” Keller said. “Steamboats would take people sightseeing through this channel. A levee was built to close it in 1883 so that a railroad could be built.”

Another threat to the parish occurred in Reserve in June 1893. Through the Reserve Crevasse, water flowed down what is now West 7th Street. Leon Godchaux, owner of Godchaux Sugar Refinery, spent $100,000 to help close the break. Approximately 100,000 sand bags, many filled and placed by a force of 600 convicts, were used to repair the levee.

Although the river reached flood stage in 1927 and flooded New Orleans, the old levee in St. John did its job for the last time. The Flood Control Act of 1928 authorized new levees and floodways and resulted in the construction of the present Bonnet Carre Spillway and the levee that today lines the River Road.

Prior to the construction of the new levee, the land along the river extended 100 yards farther towards the river. Homes and businesses, including the Reserve Pop Plant, were forced to relocate.

In addition to the protection it has provided throughout the years, the levee was a social gathering place during summer months. It was also the site chosen for Christmas Eve bonfires, a tradition that has continued since.

Today, the paved path that begins on the levee across from Our Lady of Grace Church in Reserve and extends east to LaPlace provides exercise enthusiasts a scenic route to walk, run or bike.

Funding for an 18-mile levee to protect the East Bank of the parish from the lake’s storm surge is now in the hands of Congress, making this the perfect time to reminisce about the history of the levee along the river.

Years from now, hopefully our descendants will have two levees to remember.