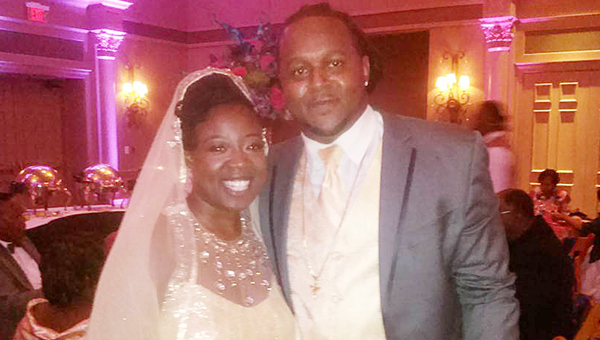 Dr. Nailah Roland and Dwayne Fisher Jr. were joined in marriage May 29.

The afternoon ceremony at The Marina Inn at Grand Dunes, also in Florence, was conducted by the Rev. Judy Brown from Bethel Community Church, Tompkinsville. A reception followed in the inn’s Nautilus Ballroom.

The bride is a daughter of Alsuna and Charles Roland of Livingston. The bridegroom is a son of Laura and Dwayne Fisher Sr. and Desiree Allen from Reserve.

Given in marriage by her father, the bride chose Esther Gibson as the maid of honor and Geana Mangroo as the matron of honor. The bridesmaids were Kimberly Jones, Michelle Cordner, Nicole Russell, Tiffani Cordner, Ayanna Russell, Delayshia Carter and Deja Fisher.

Dr. Roland is a Curtis High School graduate and received a Bachelor of Science degree in molecular cell biology from the State University of New York (SUNY) at New Paltz. She graduated from the Medical University of the Americas, St. Kitts-Nevis, with a medical degree as a general practitioner.

She is employed as an internal medicine physician at Carolinas Medical Alliance-Primary Care, Florence, S.C.

Mr. Fisher is a graduate of East St. John High School in Reserve. He received a Bachelor of Science degree in business management and marketing from Nicholls State University in Thibodaux.

He is entertainment manager with JayR Management in Florence, S.C.

The newlyweds are planning a honeymoon trip to St. Marten.