Pastor shares calling with his children 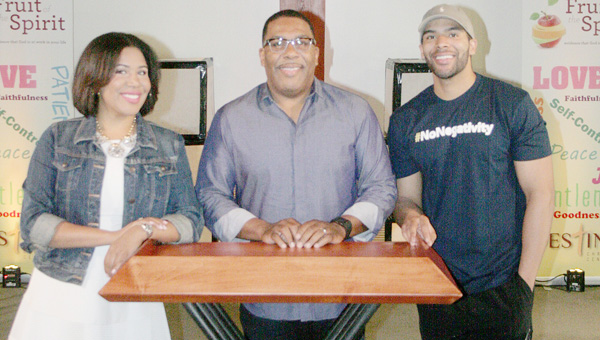 Steve Allen, center, enjoys the company of his daughter Brittany and son Steve II each and every day, as the trio work together under the ministry of Destiny Christian Center. (Ryan Arena/L’OBSERVATEUR)

LAPLACE — As Father’s Day weekend is upon us, Pastor Steve O. Allen says his heart is full of joy.

The senior pastor of Destiny Christian Center in LaPlace not only will celebrate Sunday with his children, Brittany and Steve II, but also his partners within his ministry — they are, in fact, one and the same.

The Allens’ church, Destiny Christian Center, is located in LaPlace and enjoys a large crowd of regular attendees at each service.

Brittany is the assistant pastor at the church while Steve II is its media director, and as far as Allen is concerned, the opportunity he has to watch them grow up along side him in his ministry is about the grandest Father’s Day present he could ever ask for.

“I’m so blessed to have them both working with the ministry,” Allen said. “We feel we’re an example of how family still works in today’s world.”

He didn’t expect that Brittany would become a minister herself.

“I never thought it would be the case,” Allen said. “To see how she’s evolved and matured over the years has been amazing for me.”

Steve II, meanwhile, is one of the chief influences behind keeping the church updated.

“They keep me current,” Allen said.

Brittany notes her father, likewise, keeps his children grounded in the importance of traditions.

“We live in such an aesthetic world,” she said. “But at the same time, you have to respect the sanctity of the church … we did a renovation of the church for the first time ever, and it’s been here since the 60s. There was a giant 18 foot cross. The changes were going on for months, but some of our longtime members kept asking about the cross and how important it was that it stay as it was. It makes you realize how much these things mean to everyone.”

There is, of course, a great overlap between work and family time.

“Really, you’re never off,” Steve II said with a wry smile. “But I strongly feel that working together as we do has made us a closer family. We’ve really formed a special bond, and what we do here (at the church) certainly has played a major part of it.”

Allen said while he is both father and lead pastor to his children, Brittany and Steve II take the ministry very seriously and know he does the same.

“I don’t pull punches with anyone, and really if there’s a disagreement I might be …”

Brittany finished his statement, “tougher on us.”

Allen continued, “Probably so. But having her here makes things run so smoothly because she thinks just like me.

“I know they have conviction in their faith, because they’ve seen it in action.”

That last statement alluded to Allen recalling his life before adopting the ministry fulltime. Allen worked in sports and entertainment management in those days, and he said hard partying and drinking were then a major part of his life.

“They prayed for me and they saw God change my life,” he said. “They’ve seen God at work.”