‘Once Upon A Mattress’ takes stage 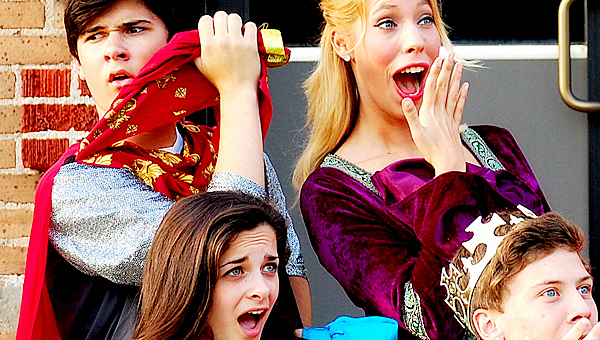 Evan Deroche, from left, Haley Taylor, Lauren Rainey and Dylan Ortego are part of team featured in ‘Once Upon a Mattress,’ which opens next week.

BOUTTE — The River Region Drama Guild recently announced the cast for the summer production, “Once Upon A Mattress.”

Evan Deroche stars as Sir Harry, while Haley Taylor plays Lady Larken in ‘Once Upon a Mattress.’

Pre-sale tickets are available at brownpapertickets.com for $15, and online sales end at 1 a.m. June 10.

Tickets will be available at the door for $20,  cash or check only.

Production leaders said people who think they know the folk tale “The Princess and the Pea,” are in for a walloping surprise with “Once Upon A Mattress.”

The play includes songs that by turns are hilarious, raucous, romantic and melodic.

The plot is simple. No one in the kingdom can marry until Prince Dauntless first marries, but his mother Queen Aggravain cooks up scheme after scheme to make sure her darling boy doesn’t wed.

Finally, a princess from the swampland far away literally swims the moat of the castle to get into the “Who will Marry the Prince?” competition.

How she manages to win the heart of the prince, virtually everyone else in the castle and eventually the Prince’s hand in marriage make for a captivating story.

The director for this year’s show is Joel Rainey, head of theatre at Benjamin Franklin High School in New Orleans.

The musical director is April Ebeling, director of music ministries at the St. Charles United Methodist Church in Destrehan.

Laura Sullivan, a senior at Destrehan High school and a principal dancer with the River Region Ballet, rounds out the production team.

The program is supported in part by a grant from United Way of St. Charles; the Louisiana Division of the Arts, Office of Cultural Development, Department of Culture, Recreation and Tourism in cooperation with the Louisiana State Arts Council as administered by the Arts Council New Orleans and by the River Region Arts and Humanities Council.

SCSO participates in statewide Drive Sober or Get Pulled Over campaign