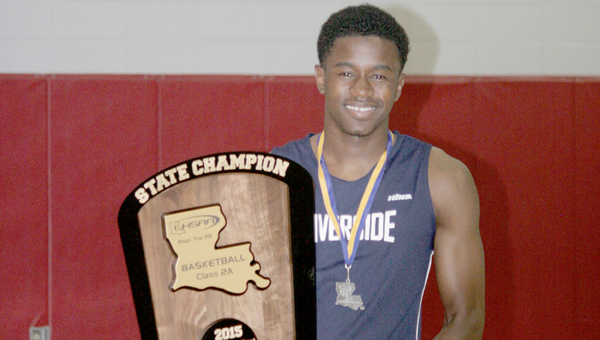 Von Julien proudly displays the first place medal he earned by winning this year’s Class 2A state 200 meter championship along with the state championship basketball trophy he helped lead his Rebels to in 2015.

RESERVE — Before Riverside’s Von Julien stepped onto the track at LSU’s Bernie Moore Stadium to compete in the Class 2A 200 meter championship last month, he was seeded fifth. When it was over, he stood as the 200 meter champion.

While on paper it was an upset victory, it was perhaps little surprise to anyone who closely followed Julien’s prep career over the years.

“He’s a winner,” said Riverside basketball coach and athletic director Timmy Byrd. “He’s a person who’s unselfish and willing to give of himself. He’s probably the most decorated athlete to ever come out of Riverside.”

Julien’s first place finish at the state track meet capped off his senior year with a bang, but it was only the latest championship for the Tulane-bound star. Julien has helped lead the Rebels to four state basketball championships, including a “three-peat” from 2013-2015. He has competed in the Class 2A state championship game for the past five seasons.

Julien earned Class 2A MVP honors in 2013 as the team’s point guard as a sophomore; he was the point guard of one of the youngest state champions in state history, a Rebels team that started a senior, two sophomores and two freshmen. He’s perennially one of the state’s leaders in assist-to-turnover ratio and has been the on-court quarterback of one of the highest scoring teams in the state.

He comes from a family of well-known names in the athletic realm. His father, Charles Julien, is a former head basketball coach at East St. John. His brother, Lucas, was the Rebels’ point guard just before Von’s ascension to the starting lineup; the two were teammates for two seasons. His sister, Chari, is a rising star on the Lady Rebels basketball team.

Julien’s win in the 200 made him the first Rebels athlete in six years to win a track and field individual championship. He had to upend Sophie B. Wright’s Antoine Oates, recording a time of 22.25 to edge out Oates (22.28). Oates had come away with the win over Julien in two prior meets.

“A lot of people told me I’d be able to sprint out the whole 200, because I work out all year long (for multiple sports) and not everyone does that,” Julien said. “I came out full speed and didn’t let up. It was a great feeling.”

Said Riverside track and field coach Joe Trosclair, “You see his talent on the football field and basketball court, and he works just as hard in track and field. (Oates) got him a couple of times before, but Von got off the blocks really well and ran a great race from the beginning.”

Julien was a standout on the football field as well, one of the offensive standouts on a team that won its first 13 games this season before finishing as a state semifinalist. Julien was one of the state’s most productive receivers and returnmen, scoring 15 total touchdowns in the regular season.

“He could have been a guy who just played one sport,” Byrd said. “But he’s willing to sacrifice for his teammates and classmates. That’s the thing that really sticks out about him, his unselfishness.”

That unselfishness was a major reason why Julien drew the interest of Tulane, where he will have a chance to reunite with former Riverside teammate Louis Dabney, one of the Green Wave’s leading scorers.

After Julien’s MVP season of 2013, the Rebels’ Malik Crowfield and Herb McGee each earned 2A MVP honors. With so much talent on the Rebels’ team, Byrd said his point guard understood what it truly meant to play that position.

“He’s one of the few players that understands what’s the top priority of being a point guard,” Byrd said. “And that’s to make his team better. He relishes that responsibility. This is a guy good enough to be the MVP of virtually any team he played on, but he’s willing to sacrifice his individual numbers to make us a better team.”

The coach has long credited Julien’s decision-making as a big part of the Rebels’ success in closing out games. The point guard, conversely, said that late-game precision is a product of shooting for sustained excellence.

“You try to do it all game long, so when you get to those last few minutes, panic never sets in,” Julien said. “You’re not rushing anything or doing anything out of the ordinary.”

He said his most memorable games were the team’s back-to-back championship game victories over Lakeview in 2014 and 2015. Both contests were close much of the way until the Rebels closed strong to win decisively in the fourth quarter.

“Those Lakeview teams were bigger than we were and really athletic,” Julien said. “We knew we had to come out and fight. We needed to play our best ball.”

He now heads to Tulane, where he hopes to help the Green Wave improve their overall record and make a run at a conference title.

“He’s a leader,” Byrd said. “He’s sympathetic to others, a very considerate person … he’s just a charismatic personality and people tend to follow. He’s a natural.”