Giving Back: Oldies but Goodies grooves for community 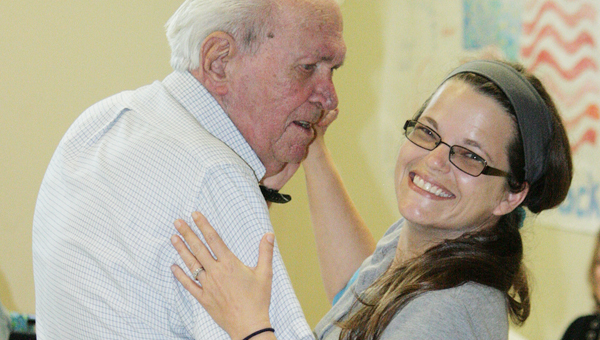 RESERVE — Ferol Simoneaux clapped his hands to the beat of some musical hits from the past, as his wife, Elizabeth, set up the next song of the day on the laptop; just below their stage, a group of dance partners were paired off, showing off their moves.

The couple was having a good time DJing at the Southeast Louisiana War Veterans Home in Reserve for the monthly birthday party for residents — and plenty of others were sharing in that fun. The Simoneauxs DJ regularly for the group Oldies but Goodies, a non-profit dance and social club established more than nine years ago that has since grown into a notably charitable organization.

“We love music and we love DJing,” Ferol Simoneaux said. “We’ve been at this for the past six years. The thing that keeps us going is, first and foremost, we really enjoy doing it. We really enjoy seeing the money we raise go to people who need it.”

The group has raised a lot of it: organization founder Erick St. Amant estimates Oldies but Goodies has raised close to $285,000 over the past nine years.

St. Amant and his wife, Patti, established Oldies but Goodies based on a desire to see more of their friends.

“We had just gone to a funeral,” St. Amant said. “Later on, after we left, I said to Patti, ‘I’m sick and tired of the only times we see our friends are at a funeral.’ I wanted to do something about that.”

From that spawned the idea to start a dance club. And to do that, the St. Amants needed music.

They knew who to call.

“My cousin, Gary Matherne, had a huge collection (of music tracks) he’d gathered over the years,” St. Amant said. “I asked if he’d be willing to DJ, and he came on board.”

Matherne and his wife Marie became part of the group, as did Cheryl and Stan Weber, who provided the funding to upgrade equipment.

“We played a show at the Norco Civic Association, and we had 35 people come out,” St. Amant said. “We could see it was growing.”

The Oldies but Goodies continued to grow and expanded their efforts into creating  and contributing to charitable events. Their first fundraiser proved a success, and provided the fuel to continue efforts in that direction.

The group’s marquee event, “Blast from the Past,” takes place each April and has grown over the years. It now draws between 300 and 400 people a year. Last year, the group raised $12,000 and donated that to ARC of St. Charles. This year, Oldies but Goodies raised $10,000, which went to the Shriners of New Orleans.

The organization volunteers to play music for the residents of nursing homes, veterans hospitals, the Council on Aging, Special Olympic events and, as requested, by other organizations. It also provides DJ services at parties, class and family reunions and functions given by individuals or companies.

Simoneaux said he and Elizabeth originally began their journey with the group after a chat with St. Amant.

“I was cutting the grass, and Erick and I knew each other,” Simoneaux said.

“He pulled up in his car and told us we needed to make it out to the dance event they were having. And the rest was history. Gary asked me if I’d be interested in DJing to give him a break here and there, if nothing else. He taught us and we’ve been doing it ever since.”

Though Matherne has retired from DJing with the group, his presence is hardly gone.

“We have 228,000 songs to select from, all from his private collection,” Simoneaux said. “He passed it on to us. He’s just an extremely giving individual.”

St. Amant credited local businesses and political figures for lending a helping hand when the group needed a boost to get something accomplished.

“I just have to make a call,” St. Amant said. “We have so many good people that believe in what we do. And I believe that’s the case because they know that money will make it into the hands of people who need it. We make sure of that.”

Simoneaux said he enjoys the events at the Veterans home because the music is a universal language that provides an uplifting presence to many residents.

“Some people may not remember things that well from recent days, but they’ll remember these songs from way back when,” he said.

“What’s truly rewarding to me,” St. Amant added, “is when I see someone who’s lost a spouse having a good time at one of our events, and they meet someone, and they start going out. That’s the kind of thing that warms my heart.”