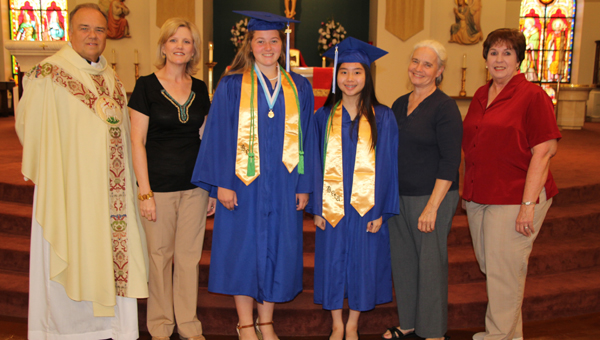 LAPLACE — Ascension of Our Lord School recently held an Eighth Grade Graduation Ceremony for the Class of 2015.

Eighth grade students and their families participated in a Mass, followed by an awards ceremony.

Maggie Morton was named valedictorian. She is the daughter of Patrick and Tammy Morton of LaPlace.

Rachel Nguyen was named salutatorian. She is the daughter of Lam and Hong Nguyen of LaPlace.

Students must score at or above the 85th national percentile on the High School Placement Test to be eligible.

Maggie was presented the Seelos 8th Grade Scholarship Fund ($2,500,) which supports students who attend a Catholic high school in the Archdiocese of New Orleans in order to offer them the same inspiration from Father Seelos that the students of his day received.

The Knights of Columbus also awarded the Catholic Citizenship Essay Contest Winner to Maggie Morton. Maggie won first at the archdiocese level and second at the state level and received a $100 stipend.

Lauren Trichell received a plaque for placing first at the archdiocese level in the Keep Christ in Christmas poster contest.

Father Walter presented the Pastor’s Award to Arielle Tillery. This year’s recipient exhibited great strides in personal growth, most improved in Christian attitude about self and others, growth in utilizing his potential and exhibited a deep awareness of his own personality.

Ruiz presented the Principal’s Award to Maggie for exhibiting the principles of citizenship, honesty in all relationships, lives a lifestyle which exemplifies integrity, participates in school and many extra-curricular activities and assumes responsibility without being asked.