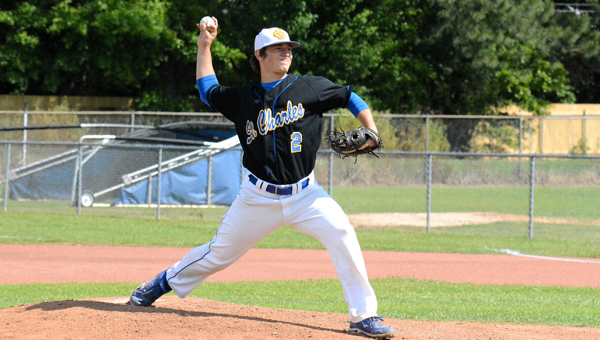 St. Charles Catholic’s Austin Weber put together a strong season at the plate and on the mound for the quarterfinalist Comets and earns MVP honors in 2015. (Submitted by Eddie Hitt)

LAPLACE —  St. Charles Catholic has a long tradition of winning on the baseball diamond, much of it fueled from players with a burning desire to do whatever it takes to help the Comets achieve excellence.

Nobody exemplifies it more than the Comets’ Austin Weber, L’OBSERVATEUR’s choice as the 2015 St. John the Baptist Parish Baseball MVP, leading this year’s All-Parish Baseball squad.

A four-year starter, Weber wrapped up a stellar SCC career with his finest overall season, excelling at the plate and on the mound for a team that reached the Class 3A quarterfinals and extended a string of 20-plus win seasons with a 22-11 mark.

“He’s got a bulldog mentality and he’s just an unselfish player,” said Comets coach Wayne Stein. “Austin is the guy not only willing to be at the plate in the big moment, he wants to be there. He’s never failed at anything because he was scared. You see him bring a lot of those qualities he had as quarterback of our football team over to baseball. When he played basketball as a junior, they saw improvement. He’s just a winner, plain and simple.”

Perhaps as impressive or moreso than any of Weber’s other statistical accomplishments is the fact he did not strike out at all this season over 33 games, a span of 101 at-bats. That streak unofficially extends to last summer as well: Weber didn’t strike out over his 17 American Legion games with the Comets’ summer league team.

“It hasn’t happened in the 12 years I’ve coached here,” said Stein, who spent 10 years as an assistant before succeeding Paul Waguespack as head coach prior to the 2014 season. “I played four years in high school. I’ve been around a lot of baseball in my life beyond that, and I’ve never seen someone go 33 games without a strikeout. He has great hand-eye coordination. And a lot comes down to the fact he’s just a competitor. It’s like he just refuses to strike out.”

Weber pitched and played second base this season. He’s also played shortstop and catcher in his Comets career, Stein noting Weber was always willing to play where his team needed him most.

COACH OF THE YEAR: As it turns out, East St. John only got one year from head coach Matt White, who recently accepted a job with McComb High School in Mississippi (see story on Page 6A). But he made a major impact, nonetheless, and he earns honors as L’OBSERVATEUR’s 2015 St. John Parish Coach of the Year.

White led the Wildcats to a 14-9 record this season, after ESJ went 7-22 in 2014. The Wildcats were not able to qualify for the postseason in 2015, but stayed in that mix until the final few games behind some much-improved defensive play and pitching.

White repeats as parish Coach of the Year after earning that honor last season with Riverside.

“All in all, I felt it was a great experience at East St. John,” White said.

“When we were playing at our best, I thought we played a really great brand of baseball. Guys bought in to what we were doing and there was a lot of excitement both on the field with our guys and in the community. I couldn’t tell you how many texts and comments I got from people who wanted to help in any way they could. It’s been a great thing to be a part of.”

Jade Falgoust has been White’s assistant for the past two seasons and said he has learned much from his head coach, the biggest thing being the importance of discipline and treating every member of the team equally.

“The first guy is just as important as the last guy on the roster,” Falgoust said.

“One thing Coach White understood was how to make guys accountable. You can’t miss practice when your teammate is out here working hard, and he made guys understand that.”

“We wanted to teach guys to respond to adversity not only on the field but everywhere else and to be successful young men.”

2014’s St. John Parish MVP followed up dominant and rare freshman campaign with another great season at the plate. Vicknair’s monster .577 on-base percentage told the tale of a player opposing teams often elected to pitch around; it wasn’t always an option, though, and he made teams pay to the tune of a .403 batting average, 3 home runs, 25 RBIs and 29 runs scored. The shortstop also recorded 12 extra base hits.

Augusta hit .365 this season and led the Rams in RBIs. WSJ coach Greg Joseph credited Augusta’s willingness to “do it the right way” and his experience — Augusta has been a Rams regular since his freshman season. While West St. John struggled this season in the standings, Augusta provided a very bright spot for the Rams program.

Gauthier often made spectacular plays in centerfield where he showed the same kind of range and athleticism that saw him star in football and soccer. Coach Frank Cazeaux called him the team’s sparkplug, and he was the table setter for an explosive Riverside offense. Emerging as RA’s leadoff hitter, he hit .377 with a .568 on-base percentage. He also scored 32 runs and drove in 14 runs.

Hymel hit .355, got on-base at a .509 clip, scored 25 runs and tied for his team’s lead in RBIs with 30. He also added two home runs and spent most of the season hitting cleanup for Riverside. Hymel was one of the Rebels’ most reliable performers, and the second baseman will be among the biggest losses Riverside must find a way to replace in 2016.

Loupe’s first season as a starter was a spectacular one at the plate. He ascended to the three hole during a season that saw him start red hot and carry it through, finishing with team-leading marks in batting average (.438) and RBIs (37) while providing strong defense in the outfield. SCC coach Wayne Stein called it a rarity when a player has the kind of breakout season Loupe had as a first-year starter, crediting Loupe’s work ethic.

Martin hit ..333 and got on base at a .447 clip in his final season with the Wildcats. He also drove in 20 runs and scored 20 times while collecting 10 extra base hits. A four-year starter, Martin played shortstop and third base while serving as the Wildcats closer and hitting in the two hole this season. ESJ coach Matt White called him a tough, hard-nosed “bulldog” of a player.

Morris hit .371 and tied for the Rebels’ lead in RBIs with 30 on the season. He collected eight extra-base hits and hit two home runs to go with a .505 on-base percentage, proving himself all season long as one of the biggest threats in a lineup that took off in April: the Rebels scored 10 runs or more in 11 of their last 15 games. The catcher should be a big part of Riverside’s core again next season.

The Comets’ shortstop was a steady force in the Comets’ batting order, batting .400 with 28 RBIs and a team-leading three home runs. Ory grew tremendously as a player from his sophomore season, a progression SCC coach Wayne Stein said was expected after a tremendous 2014 Legion campaign. Stein added Ory is “as good a shortstop as we’ve had” while providing a power threat in the middle of the lineup.

The Comets  needed a pitcher to step forward and provide a compliment to returning hurler Austin Weber. Roussel did much more than that, as he pitched 68 innings and went 6-3 with a 1.33 ERA, the latter number leading St. John Parish. Of Roussel’s three losses, one came in relief while the others came in a 1-0 loss to Dutchtown and a 2-1 loss to Brother Martin, proving he could excel against any level of competition.