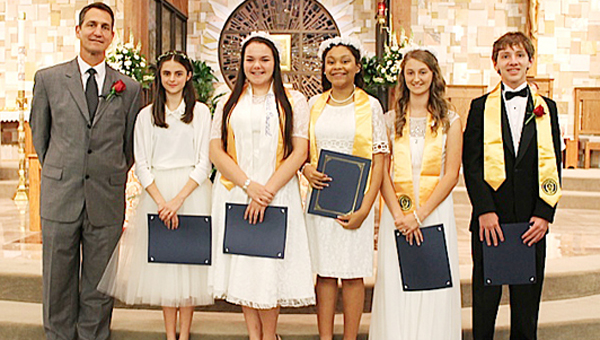 Among those were the five students with the highest grade point averages.

Each of these honor graduates completed all honors courses offered during their middle school years. They each received the Monsignor Pete Bergeron Scholarship in the amount of $1,000 to the Catholic high school of their choice.

The Sr. Mary Germaine Roussel Award is given by the faculty to an eighth grade girl who exemplifies Catholic values in her time at SJA.

She exhibited the following qualities: practice of her faith and Christian character, service, attitude, and respect. Sister Pier Carla Barone, F.D.P. presented the award to Bourlet on behalf of the Roussel family.

The Msgr. Edward Boudreaux Award is given by the faculty to an eighth grade boy who exemplifies Catholic values in his time at school. He exhibited the following qualities: practice of his faith and Christian character, service, attitude and respect.