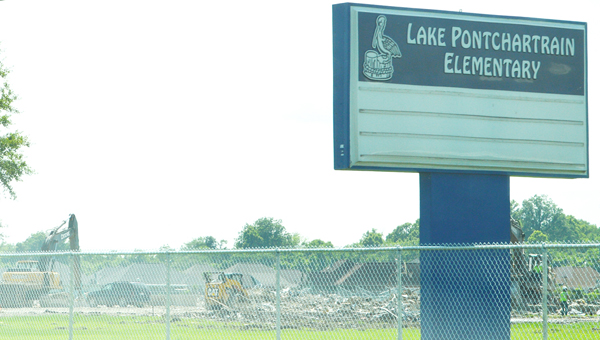 The demolition of Lake Pontchartrain Elementary School is scheduled to be complete by July.

District officials say there is no validity to concerns

District 8 School Board member Russ Wise posed the question at last week’s school board meeting, saying his concern came directly from those who live and work in the area surrounding Lake Pontchartrain Elementary School.

“They tell me that the rates of asthma and hay fever and a number of other problems have escalated since demolition began,” Wise said. “They are absolutely sure it is either caused by the dust from the (demolition) or from mold that was left in the building.”

Steve Bourg, who was addressing Board members concerning construction projects at Lake Pontchartrain Elementary School and East St. John High School, said an environmental consultant the School Board hired examined LPE’s structure prior to demolition to verify the air quality.

Bourg, vice president of Allsouth Consulting Engineers, said the consultant found no problems inside of the school. He did say there has been a lot of dust associated with the demolition.

Wise asked Bourg if there was any validity or concern to accusations of health problems stemming from the demolition.

“Not to my knowledge,” Bourg said, adding an environmental engineer went out to the demolition site after the health concerns were expressed and verified there was no mold in the air.

The school, which sits on U.S. 51, has been lifeless since Hurricane Isaac struck in 2012. The LPE community of 600 kindergarten through eighth grade students and staff members are located in a temporary site at the rear of East St. John Elementary.

In April, demolition officials told attendees of a public meeting concerning demolition that the process would be complete in July.

Demolition project leaders promised community members and surrounding neighborhood residents work would be kept to normal business hours, adding demolition activities would not take place at night or on weekends.

The demolition is the precursor to construction of a new Lake Pontchartrain Elementary.

Team members with Yeates and Yeates Architects in New Orleans are designing the project, which will go to public bid in October. The low bidder wins the contract, and construction is planned to begin in November.

The school is not expected to reopen until August 2017.

Designers said the new school would service pre-kindergarten through eighth grade students and a Head Start. Younger and older students will have separate wings and a cafetorium would be included that can be easily accessed by community members for public events that would keep residents from wandering the halls.

Z. Ames Yeates, a partner in the architectural firm, said the new school would be an “attractive” element for surrounding neighborhoods and an “anchor” feature for the U.S. 51 corridor.

In other school construction news, Bourg said repair work at East St. John High should be complete July 17, with some buildings ready in the next two weeks, including the main classroom building.

Rock is being cleared from the football field and work is taking place with sprinkler heads. A pump station is also under construction. Cory Butler was recently named principal at East St. John. Students — displaced at the Leon Godchaux campus since Hurricane Isaac — are set to return to their Airline Highway campus this fall.

East St. John is the school district’s largest school, educating more than 30 percent of the District’s students with approximately 1,300 pupils.