Louisiana Tech’s Juluke overcame odds, wants others to do same 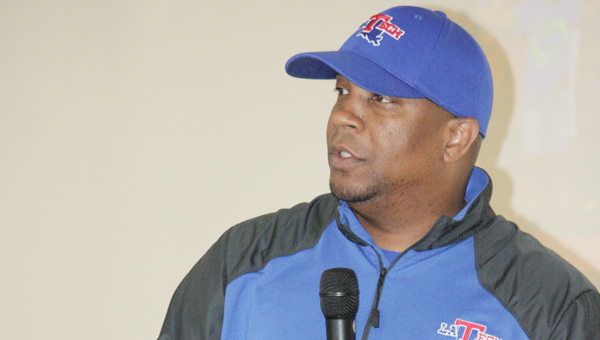 Jabbar Juluke speaks at New Wine Christian Fellowship’s Summer Camp Business Luncheon last week. Juluke spoke in support of the camp, which aims to help children from single-parent, lower income households maximize their potential. Juluke was one of seven siblings raised by his mother after he lost his father at the age of 3. (Ryan Arena/L’OBSERVATEUR)

LAPLACE — Louisiana Tech assistant football coach Jabbar Juluke stood at the podium at New Wine Christian Fellowship’s annual Summer Camp Business Luncheon speaking about a cause very near and dear to his heart.

Juluke, the former head football coach at Karr High School, was the guest speaker at the event, which was held to raise support for the “Kids on the Move” summer camp. New Wine provides a summer camp for eight weeks for children ages 3-13 beginning the first week of June.

New Kids on the Move camp director Karina Portillo knows how much a summer program can help children from single-parent homes succeed. Portillo’s mother passed away when she was 5, and she went on to become one of ten children raised by her aunt. She and her siblings found help through such programs.

The event allocates more than 100 scholarships each year for children, ages 8-13, who come from single-parent homes earning $25,000 or less a year, including homes where a parent has been incarcerated.

Juluke, who lost his father at the age of 3, grew up with six siblings in a home in the St. Bernard Housing Development Projects. He spoke to members of the community assembled at the luncheon about his journey.

“Growing up in the projects, the odds were my choices were to end up dead, in jail or selling drugs by the age of 14,” Juluke said. “At 43 years old, I’m very happy to say I overcame those odds that said I wouldn’t make it.”

Juluke credited the strength of his mother, who he said pushed he and his siblings to make something of themselves.

“Of the seven of us, five graduated college, and the other two are doing better than I am,” Juluke said with a smile. “I remember growing up there and, if I did anything wrong, my mother knew about it before I even got home. I’d take a ‘whuppin on the street and then again at home.”

But summer programs, he said, were also key in his development.

“She put me in a summer reading program, and she made it clear I had to take that seriously,” he said. “If I didn’t, that was it for football. That’s something I impart to all of my players. If you don’t go to class, you can’t play.

“Programs like this give these kids mentors and instill strong values in them. They help academically, spiritually and socially. Being a single parent is such a difficult job. Anything like this that can provide a lift is so helpful.”

New Kids on the Move camp director Karina Portillo also comes from a single parent home.  Her mother passed away when she was 5 years of age, and she went on to be one of 10 children raised by her aunt.  Between the ages of 6-12, Portillo and her siblings attended a local summer camp on scholarships.

“It’s not babysitting,” Portillo said while speaking at the luncheon. “When we say Kids on the Move, we mean it. We’re active and keeping everyone going.”

She noted the statistics working against many of today’s youths in disadvantaged situations, specifically that 80 percent of children who do poorly in school and grow up in single-parent households or have a parent who is incarcerated may themselves end up in the criminal justice system.

“They say that it takes an entire village to raise a child,” she said. “It’s not a one-man job. Together, we can all achieve more.”

New Wine Pastor Neal Bernard founded Kids on the Move 12 years ago, he said, “with the goal of serving children most vulnerable to falling through the cracks.”