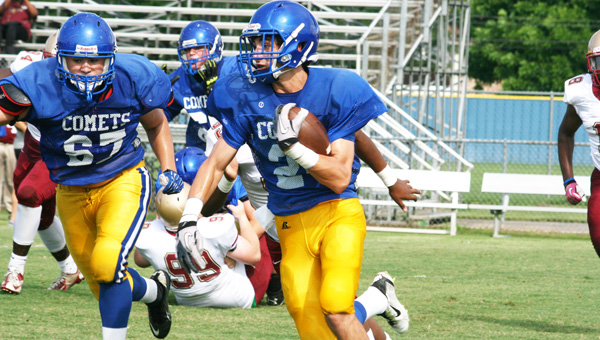 SCC coach Frank Monica wouldn’t call it a perfect performance by any means, but said it was a session of quality work that he was pleased to get in in spite of the week’s rainy weather; the scrimmage was originally scheduled for Tuesday, but was moved to Wednesday due to rain.

“Offensively, I was disappointed we didn’t know our assignments well enough,” Monica said. “Defensively, we were working with a smaller group than we will be in the fall. We didn’t have our full compliment of guys. But it was a lot of good work. The most important thing was we got out unscathed in terms of injury.”

“I really wanted to expose (Ratliff) to some live competition,” Monica said. “We needed to see how he reacts when the grenades go off. He’s a guy who just needs experience. We have some things to clean up in terms of decision-making and mechanics, but he knows our system. He played well and showed a lot of poise.”

The Comets took over on the Tigers’ 25 yard line and Justin Loupe quickly picked up 13 yards on a toss to the right side. Terrebonne stiffened up and forced SCC into a fourth-and-goal play from the 8, where the Comets converted for a touchdown on Ratliff’s rollout pass to Dane Authement to give SCC a touchdown lead.

Another key defensive play came on a third and two play on the ensuing Terrebonne possession, where defensive tackle Hunter Waldridge stuffed a run attempt up the middle to force a punt.

Each offense stalled on its next drive, but SCC scored again on its third drive of the day thanks to a pair of big plays, the first a Loupe run off tackle for 23 yards, then a big third-and-nine conversion between Ratliff and tight end Nick Scioneaux for 19 yards, inside the Terrebonne 10. Ratliff and Tajh Smith connected on a wide receiver screen play that Smith took in for the 9-yard touchdown.

Ratliff’s third touchdown pass of the day came on another long play by Scioneaux, this time as the receiver got open down the seam. Ratliff placed a deep throw on the money and Scioneaux rumbled in for a 50-yard touchdown.

The Tigers first team scored its lone touchdown on the back of an 85-yard drive — also representing the first drive the Tigers crossed midfield. Wide receiver Malcolm Smith scored on a 15-yard slant pass from Mason Turner to make it three first team scores for SCC, one for Terrebonne. Two offsides penalties in the SCC redzone helped extend what was an 18-play drive.

“That was one drive in particular I was disappointed in,” Monica said. “We’ve got to clean some things up.”

The Comets and Tigers each scored once with the second teams on the field during the scrimmage.

Smith, who lined up at wide receiver and running back for the first and second unit at times, scored for the Comets, while tailback Keyshawn James’ 58-yard run highlighted the day for Terrebonne.

Monica said Smith’s versatility will serve his team well, and fans saw flashes of it at the scrimmage. On more than one occasion, he lowered a shoulder and delivered punishment to a defender; he also made a highlight play on a sideline reception, hauling in a leaping catch and getting a foot down inbounds on a reception from backup quarterback Lloyd Nash.

“He stepped up for us,” Monica said. “He should be a playmaker on offense, and we’ll continue to insert him into different spots. He’s got some quickness and the ability to make something happen after the catch. He gives us an element we really didn’t have last year.”