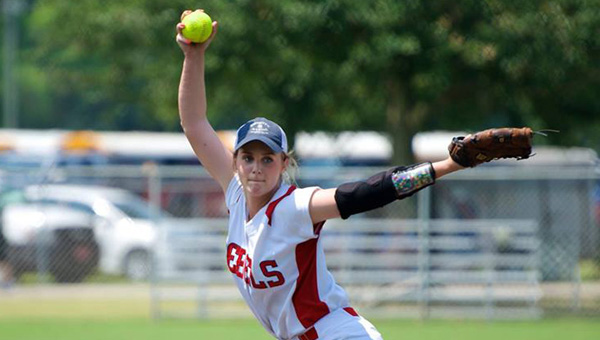 St. Charles Catholic and Riverside Academy combined to win almost 50 games this softball season, each school earning a No. 2 seed in its respective classifications and making it to Sulphur. It’s no surprise that each are well-represented on L’OBSERVATEUR’s 2015 All-St. John Parish Team.

This year’s squad is led by our selection as the  season’s Most Valuable Player, Riverside senior first baseman Hailey Tassin.

Tassin anchored the middle of one of the highest scoring Lady Rebel lineups in team history. Batting cleanup, she hit .500 with 7 home runs and 38 RBIs, all of those numbers leading the parish. She also scored 30 runs. Tassin pitched for the first time this season, earning a 2.05 ERA and a 4-3 record to help RA reach the semifinals.

St. Charles Catholic coach Ty Monica earns our Coach of the Year honor after guiding his Lady Comets to a 25-7 mark and a finish in the Class 3A state quarterfinals. SCC brought back just two senior starters and had an extremely young pitching rotation, but returned to Sulphur after a one-year absence. SCC earned the District 11-3A championship, largely coming on the back of a 4-1 victory over eventual 3A state champion John Curtis.

Tassin stepped into a starring role on this year’s Rebels squad and made herself at home in the spotlight. The pitcher/first baseman hit .500 this season while racking up a 1.446 OPS, 7 home runs, 38 RBIs and 30 runs scored. As a first-time starting pitcher, she compiled a 2.05 ERA to go along with a 4-3 record, and her fielding percentage was perfect on the year.  Riverside’s vocal leader was also its top statistical producer and it earns Tassin honors as the 2015 L’OBSERVATEUR Softball MVP.

Coach’s Quote: “Everyone sees this big, strong girl when she’s up to bat and she didn’t disappoint. I’m excited to see what she does at the next level. She swung for the fences. She’s just got that go big or go home type of personality. She volunteered to pitch and did a phenomenal job despite not having that experience.”— RA coach Tamra Regalo.

Delaneuville began the season dealing with injury but quickly regrouped to have a big senior season. The shortstop batted .478 to go with a 1.524 OPS, 29 RBIs, 29 runs scored and 5 home runs.

Coach’s Quote: “She was a little frustrated early, but once she got going she was really red hot. She was one of our best hitters in the playoffs and someone who came through regularly under pressure.” — RA coach Tamra Regalo.

Coach’s Quote: “To say she held her own as a 7th grader is selling her short. The exciting thing is she’s only going to get better. She’s so composed in an extremely rare way for someone as young as she is.”— RA coach Tamra Regalo.

Julian quickly ascended up the Comets’ batting order, emerging early in her career as a clutch performer. She batted .398, scored 34 runs, had 28 RBIs and 10 extra-base hits (including 5 triples).

Coach’s Quote: “To be a freshman doing what she did for us, it says a lot. She had three RBIs (in SCC’s win) against Curtis and scored another run on top of it. She had a really big season.” — SCC coach Ty Monica.

Nobile was an on-base machine, sporting a .605 OBP this season to go along with a .464 batting average and 37 runs scored. She was also a strong defensive catcher, throwing out 20 of 25 base runners attempting to steal.

Coach’s Quote: “The adage is you always want to put the ball in the hands of the kids who mean the most, and at catcher that was every pitch. She got on base at a .600 clip and that did wonders for the rest of our lineup.  — SCC coach Ty Monica.

Milioto held down second base for Riverside and ascended to the second spot in the batting order, where she hit .439 with 2 home runs, 26 RBIs, 29 runs scored and a .483 on-base percentage.

Coach’s Quote: “Janie really stepped it up for us and gave us a really consistent performance near the top of our order. She really began to hit it hard as the season went on and she always found a way to get on base to get us started.” — RA coach Tamra Regalo.

Smith batted .358 with eight doubles, three triples and 29 stolen bases for an East St. John team that put together some explosive stretches of offense in 2015. Smith pitched, played shortstop, third base and in the outfield for ESJ.

Coach’s Quote: “She played wherever we needed her on a particular day, and she was unselfish about it. She always had a hot bat and found a way to get on base for us. She came ready to play in every game.”— ESJ coach Chad Smith.

Watson’s future is bright, but then again so was her sophomore campaign: 5 home runs, a .494 batting average, a .559 on-base percentage, 33 RBIs and 32 runs score all placed the third baseman among the area’s leading hitters.

Coach’s Quote: “She’s a weapon. If I’m playing against her, I’m telling my fielders to back up a little. She did it in the field as well. I’ve seen a lot of great third basemen, and she compares well. She made very few mistakes.”— RA coach Tamra Regalo.

An All-Parish mainstay, Wesley completed her fourth year as a Comets starter and was again one of the team’s leaders. The third baseman batted .382, drove in 31 runs and scored 38 as the team’s leadoff hitter.

Coach’s Quote: “She always seems to come up in big spots and with that key hit. We moved her around the order this year to see where she could best help us, and she settled in that leadoff role. She holds down third base with the best of them.” — SCC coach Ty Monica.