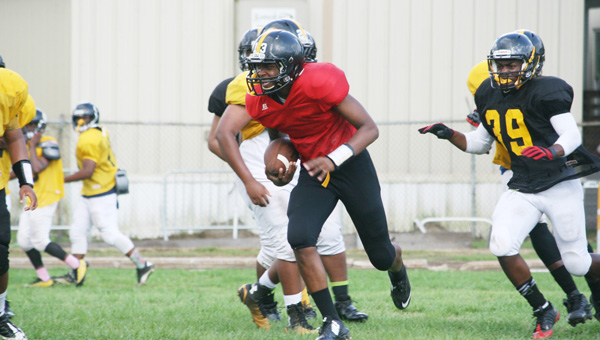 RESERVE — East St. John and new head football coach Alden Foster are getting used to one another as Foster leads his first spring of work on the gridiron.

“It’s been a smooth transition,” Foster said. “We’ve got a few guys really asserting themselves as leaders. We’re all learning about one another on both sides.”

East St. John will take the field at Joe Keller Stadium at 10 a.m. today in its Black and Gold intrasquad scrimmage. On April 21 at 6 p.m., the Wildcats will host McDonogh No. 35 for their annual spring game.

As every new coach must do early in the spring process, Foster is evaluating the depth of his team. The scrimmage today, he said, should go a long way in that regard.

“In an intrasquad game, everyone gets a chance to play,” Foster said.

As Foster installs his system, many of the key players at his disposal will largely be different ones than those who played under Foster’s predecessor Phillip Banko. It starts at quarterback, where LSU-bound Xavier Lewis will be succeeded by Marquise Darensbourg, who transferred to ESJ after starting at Destrehan a year ago. He passed for 1,396 yards with 14 touchdowns and five interceptions while in a time share with Kohen Granier. Darensbourg is eligible to play for ESJ this fall season as his father lives in LaPlace.

At tailback and wide receiver the touches must be redistributed as well. Tailback Nigel Anderson is gone to Tulane and receiver Jarrod Jackson to Louisiana-Lafayette, leaving the positions open for competition. Foster noted sophomore tailback Kelvin Keller as someone having a very strong spring.

Damonte Coxie, a transfer from Tara High School, has the potential to make a very quick impact. Coxie, a 6’3”, 170 pound wide receiver, already made an impact at ESJ as a track standout this season. C.J. Turner and Raysean Williams, who will be a junior and a sophomore respectively, are also in the mix at receiver and are players Foster said are excelling in spring.

“He’s our mike and he’ll be making all the calls,” Foster said.

The coach added he believes the strength of his defense will lie in its back end. Defensive backs Dontrell Allen and Shayhan Williams are experienced players coming off of big seasons for the Wildcats.

“Those guys are taking the lead for us,” Foster said.