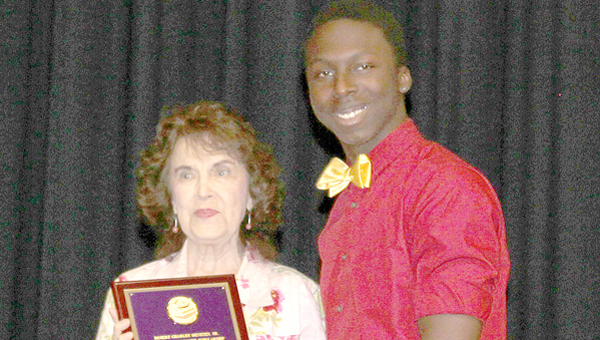 “Julian is an outstanding student, visionary, and tireless contributing member of our community,” said Doris Menezes, widow of Coach Menezes, who presented the award.  “He has excelled in the classroom and has demonstrated leadership qualities recognized by his school, his church, and his community. We are honored and privileged to continue to be part of his future educational pursuits.”

For his senior project, Turner worked with a Tulane professor of biomedical engineering to create a prosthetic using a 3D Rapid Prototyping Printer.

At the school, he participated in the Interact Club, the Varsity Soccer and Track and Field teams, and the Marching and Concert Bands.  Turner organized, established and was the leader of the first HHS Gay-Straight Alliance. He was selected as Hahnville High School’s Student of the Year.

He was a member of the Louisiana Youth Advisory Council. He volunteered for the Hurricane Isaac Relief Project, the Alligator Festival, Toys for Tots during Christmas, Trunk or Treat at Halloween, as well as being an usher at the Mt. Airy Baptist Church.

Turner is the son of Valerie Turner of Paradis. He has been accepted at the University of Southern California.