Comets closing in on spring scrimmage 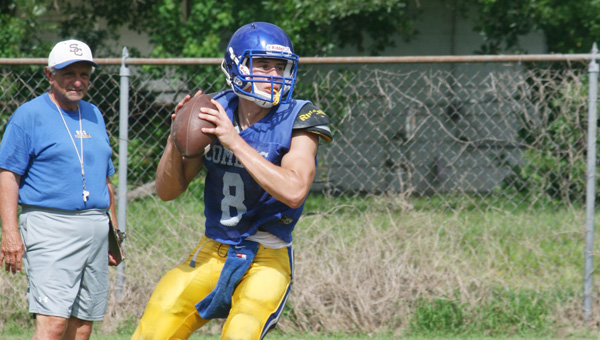 LAPLACE — As St. Charles Catholic winds down its spring work, coach Frank Monica doesn’t believe his team is close to where it needs to be.

There are several reasons for that outlook: injuries, a late start for 11 players who were playing with the Comets’ baseball quarterfinalist and an offense that returns just four starters from last season’s record-breaking unit.

“We’re playing catchup right now,” Monica said. “We had to work around a few things and we’ve spent most of this time installing. We thought about going without a scrimmage, but we felt like our team needed to be tested.”

SCC will host Terrebonne for its spring game Tuesday night, giving many fans their first look at the Comets’ new offensive look.

That begins at quarterback, where Patrick Ratliff steps in for Austin Weber. Ratliff saw action last season, particularly in extended time during the Comets’ 24-0 quarterfinal win over De La Salle, a game Weber had to leave with an injury.

Ratliff, who will be a senior this fall, is well-versed in the Comets system and Monica spoke highly of the first-year starter to be.

“He’s been in our program since the ninth grade, so there’s nothing new for him verbiage-wise,” Monica said. “He’s bigger and taller, and he’s added bulk. He’s not afraid to run with the ball. The spring game is an opportunity to see how he’s matured.”

At running back, Justin Loupe will lead the way after the departure of Erron Lewis. Loupe may be new to the lead rushing role, but he’s seen plenty of action. Last season he rushed 102 times for 562 yards and 10 touchdowns. Tajh Smith will split time between wide receiver and tailback and serve as a rushing compliment. At wide receiver, Dane Authement will be the top returning target.

“We’re losing over 3,000 yards of offense between Austin and Erron,” Monica said. “We do feel like we’ve got some quality players at the skill positions, though. We feel good about our backfield.”

The gelling of an offensive line replacing three starters is the key area to watch in the upcoming scrimmage. Tackle Tyrin Arceneaux and center Kobie Houston are returning starters, but the other three spots must be filled.

“We won’t have much time into the season, considering who we play,” Monica said. “How quickly that comes together will be huge, especially in terms of breaking Patrick in as a new starter. Hopefully, we play really well defensively and give our offense some time.”

That defense looks to be a strong point, with seven returning starters and a very experienced secondary leading the charge.

Eric Lewis will return for his senior season after earning L’OBSERVATEUR honors as St. John the Baptist Parish’s Defensive MVP. Justin Dubose, Jace Snowden and Jacoby Johnson round out the starting secondary, with Justin Ory also expected to play a big role after splitting time between safety and linebacker last season.

The biggest key, Monica said, is the play of defensive ends Jonathan Scarpero and Trenton Matus, both returning starters.

“Our defense will go as they go,” Monica said.