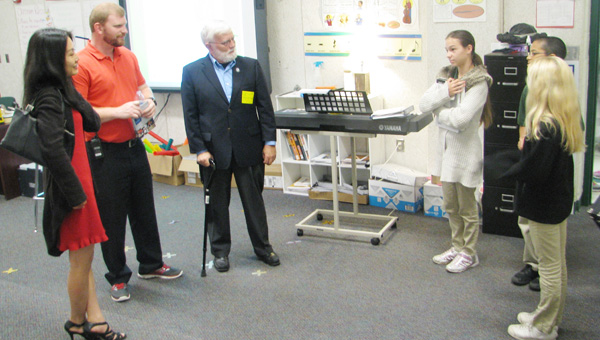 LAPLACE — Some of St. John the Baptist Parish Public School District’s elementary schools got a special visit April 28 from an organization that has been key in helping to build the district’s instrumental music program.

In 2013, the District announced a partnership with the VH1 Save the Music Foundation to increase young students’ exposure to music.

Chiho Okuizumi of the VH1 Save the Music Foundation finds out what the favorite musical instrument is of, clockwise from top, Veronique Negron and Aston Watkins. The students are second graders at LaPlace Elementary School.

The organization awarded the District a grant that provided 30 instruments to Emily C. Watkins Elementary School to build a foundation for a band at the school.

Chiho Okuizumi, grantee and compliance manager for the foundation, recently revisited ECW to get a first-hand look at what the donation has helped achieve.

“I think it’s great that students are now holding instruments who had never held them before and I’m honored to be part of that change in this district,” Okuizumi said after viewing an instrumental music class at ECW.

That change is evident at ECW, where 27 students in grades 6-8 are now learning to play instruments.

“Band changes the lives of kids who otherwise struggle to find a niche. It helps them realize they do have talent and gives them a place to go to stretch their wings.”

Gauley and his students are now excitedly preparing for their first band concert, which will take place at 9 a.m. May 21 at Emily C. Watkins.

“A year ago most of these kids had never held an instrument – and some didn’t even know what they were called,” School Board member Russ Wise, a longtime advocate for a music program, said.

Since the donation, the St. John the Baptist Parish Public School District has further expanded its music program by including general music classes at all of its elementary schools.

Okuizumi got to witness that in action when she stopped in on a second grade general music class at LaPlace Elementary School, where students were learning musical notes and how to keep rhythm with basic instruments such as maracas and rhythm sticks.

“The students are so motivated,” teacher Jeremy Rodrigue said. “When I walk through the door they start clapping and saying, ‘yay, it’s time for music!’”

The St. John the Baptist Parish Public School District is in the process of applying for another grant through the VH1 Save the Music Foundation to bring a band program to a second elementary school.

Okuizumi said her foundation is committed to helping St. John the Baptist Parish expand its instrumental music education program throughout the district.