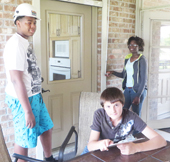 BATON ROUGE — St. John the Baptist Parish 4-H’ers were among 15 4-H Club members from across the state who attended a workshop on the LSU Baton Rouge campus to develop a plan for minimizing the damaging effects of a potential flood at the LSU AgCenter 4-H camp near Pollock.

The St. John the Baptist Parish 4-H members on the State 4-H Adaptation Team are Emily Bartholomew, William Ledet and DeLloyd Gray. They attended the meeting at LSU May 1-3.

Team members are learning that hazard mitigation (also called adaptation) is action taken to reduce long-term risks to people and property from hazards, such as flooding and strong winds. In addition they are also learning about ownership of public property, evaluating options for spending public funds and the role of government in disaster management.

At a previous meeting held at 4-H Camp Grant Walker in February, team members conducted a vulnerability assessment of camp structures. They wrote a report identifying problem areas that need additional protection from natural hazards, including a counselor cabin located near Big Creek, and the amphitheater known to all 4-H’ers as the Greek Theater.

At the Baton Rouge session, team members worked on an official hazard mitigation grant application for the camp facilities. Civil engineering and hydrology experts guided the students in development of a plan to prevent flooding of the camp structures.

“The students are emerging from these experiences better prepared to have a voice in community hazard mitigation conversations and becoming aware of information that helps them protect their own homes from future disasters,” said Deborah Hurlbert, LSU AgCenter 4-H extension associate.

“At the end of the project, the 4-H’ers will have completed a hazard mitigation grant application and present their findings to parish officials.”

The project is funded by a Statewide Hazard Mitigation Community Education and Outreach Grant that the Governor’s Office of Homeland Security and Emergency Preparedness calls “Get a Game Plan.”