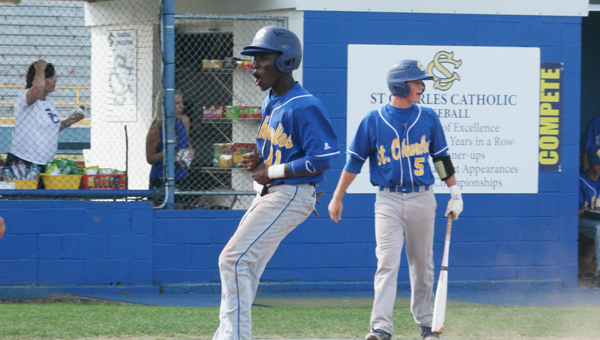 LAPLACE — It wasn’t that long ago, St. Charles Catholic coach Wayne Stein recalls, he filled out his lineup card and penciled in “14-10” where the Comets’ record was notated.

The Comets are now 22-10 — and headed to the Class 3A quarterfinals.

The victory Wednesday extended the Comets’ streak of allowing two runs or less to 11 straight games. SCC has allowed a total of 11 runs over the past 11 games.

Notre Dame ended its season with a record of 17-13.

Roussel (7-2) earned the victory, going the complete game while striking out two and walking one. The junior right-hander has worked in tandem with fellow starting pitcher Austin Weber to absorb most of SCC’s time on the mound in the latter part of the season, and Stein said it’s no accident that success has followed.

“Everyone obviously knows about Austin, but Zach’s had success in some really big games for us,” Stein said. “He’s got a 1.20 ERA, with games against teams like Dutchtown and Brother Martin in there. He’s no stranger to the big game and that’s why we felt good about him (Wednesday).”

Roussel acknowledged that Notre Dame hit some balls hard early in the game, but he quickly adjusted.

“I just had to work lower in the (strike) zone,” Roussel said. “Keep it low and away. I can’t say enough about my defense behind me. They made some big plays. (In the second inning), they hit a line drive right to Austin that he caught, and it slowed down their momentum.”

Eian Mitchell went 3 for 4 to lead the Comets at the plate.

The Pioneers took an early 1-0 lead when Jacob Vicknair doubled to lead off the third inning and later came around to score on a wild pitch.

But from there, the game belonged to the Comets. Lloyd Nash was hit by a pitch with one out, then Dane Authement singled to get a big inning started. Austin Weber singled to left to tie the game with two outs, then Justin Ory was the second Comet to be hit by a pitch in the inning. Eian Mitchell and Brady Newman socked back to back RBI singles, then SCC scored a fifth run on a balk to make it 5-1.

“I thought we were a little tight early,” Stein said.

“We were able to push through that.”

Roussel was in a groove. He retired the Pioneers side in order in the fourth inning, then helped his own cause by leading off the Comets’ half of the fourth with a single. Authement smashed a triple to plate the Comets’ sixth run of the day, and a throwing error into the SCC dugout allowed him to score as well.

“When you’ve got a lead, you just pound the strike zone,” Roussel said.

Notre Dame saw its season slipping away with a six-run deficit, but pushes in the fifth and sixth were negated by strong defensive plays. The first came by Lloyd Nash, whose diving catch in right field with two on and two outs drew a roar from the crowd. Then, in the sixth, Notre Dame loaded the bases with one out, but Roussel got a ground ball and the Comets turned it into a double play to escape with no damage. The Comets scored one more run on a seventh inning error.

Roussel didn’t allow a hit after the second inning.

“We’re playing some really solid baseball right now,” Stein said. “We’ve established a rich tradition here of being in the quarterfinals, I think 12 of the past 14 or 15 years we’ve been there.

“I don’t think our kids are ready to celebrate just yet.”