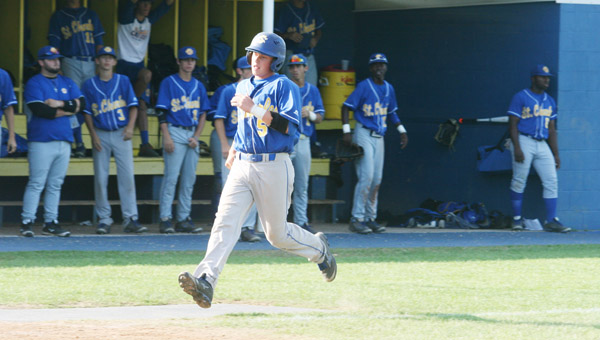 But as is habit for SCC, the Comets adjusted, and quickly pulled away thereafter.

St. Charles turned a 4-1 fifth inning lead into an 11-1 victory by the 10-run rule in six innings, advancing to the second round of the postseason.

Justin Ory capped a perfect day at the plate with a three-run double in the sixth inning to push the lead to 10 runs and seal the game. Ory went 4 for 4 with four RBIs.

“I felt good, like I was seeing it well today,” Ory said. “We feel like we’re ready to make a run. We made all of the plays we had to today, especially defensively. We focused on that at practice all week.”

Austin Weber earned the victory on the mound. He went five innings, allowing four hits while walking one and striking out five.

“I just set out to keep throwing strikes and let my defense play behind me,” Weber said. “Every time we play, they show up. When our defense plays well, we play well and have success.”

St. Charles pushed two runs across in the second inning after Weber and Ory each singled and Mitchell walked to load the bases with no outs. Brady Newman’s sacrifice fly gave SCC its first lead, then a balk brought home the second run.

Dane Authement’s third inning triple with one out ignited SCC again. Loupe’s sacrifice fly made it 3-0. Weber singled then reached third on an error, and Loupe socked a single to push the Comets to a 4-0 advantage.

“We squared up on a lot of balls today,” Weber said. “Their centerfielder made a lot of great plays that held us. Give (Port Barre) a lot of credit. They played a great game.”

Port Barre (13-10) threatened to make things difficult in the fourth, however, loading the bases with one out on singles by Bryce Higginbotham, Austin Lanclos and Dustin Sanders. Blake Aymond walked in the Red Devils’ first run of the day, but Weber regrouped: he struck out J.J. Sylvester before getting Christian Speyrer to fly out to center — with Authement securing a diving catch to end the inning.

“We make a mistake, but Austin can pitch us out of the inning, and that’s a pretty nice thing to have. In this place, you’re a swing away there from losing the lead and the momentum, but we held.”

That seemed to spur St. Charles to the finish line. Lloyd Nash and Loupe each singled to make it 5-1. Ory beat out a throw from third for an infield single, then Mitchell knocked one into the outfield to score two more, making it 7-1. Zach Roussel walked in his team’s 8th run after Newman and Zach Weber reached to load the bases.

“That guy’s done it for us all year,” Stein said. “We’ve got a solid lineup, one through nine. We’ve been really good with two outs, and I think that’s because our kids are resilient.”