‘Joseph’s Journey’ & others intersect at Relay for Life 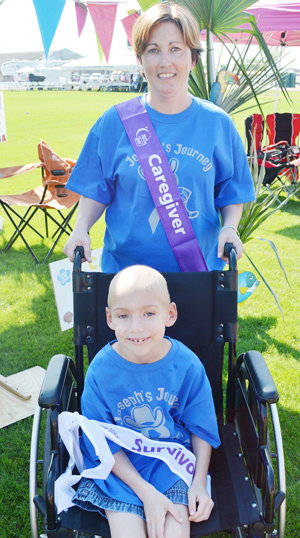 Mother and son Brandi and Joseph Carr were two of many caretakers and survivors who attended St. John the Baptist Parish’s Relay for Life Saturday. Joseph, who was diagnosed with a brain tumor in February, threw water balloons, played and laughed with family and friends during the event.

LAPLACE — It wasn’t Brandi Carr’s first time attending St. John the Baptist Parish’s Relay for Life, but her presence at Saturday’s fundraising event carried immense personal significance this year as it came on the heels of a diagnosis that launched her family into the fight for her child’s life.

Carr, the mother of four sons, was one of several people at Joe Keller Memorial Stadium wearing a T-shirt emblazoned with “Joseph’s Journey,” which signifies the fight her 7-year-old son Joseph — who was diagnosed in February with a brain tumor — has waged since his diagnosis.

Employees of the Entergy — Reserve network were just some of the business employees who took part in St. John the Baptist Parish’s Relay for Life. Relay fundraising season runs from August to August, and so far the collective St. John Parish teams have raised $53,680.01 for the American Cancer Society, which uses Relay donations to fund research, provide free lodging to cancer patients, fund clinical trials and offer free 24-hour cancer support via phone. (Monique Roth/L’OBSERVATEUR)

Brandi said in the less than two months since his diagnosis, Joseph has undergone 30 radiation treatments and is currently undergoing chemotherapy, adding nine more months of treatment lie ahead.

“They said it was a tumor they’ve never seen before,” Brandi said of Joseph’s doctors.

“We’ve received so much love and support from our friends, family and the community.”

Joseph was a student at John L. Ory at the time of his diagnosis, and Brandi said the students and staff have been in touch with him during his absence from classes, even sending cards and gifts to lift his spirits.

Although feeling the effects of continued chemo treatments, Joseph threw water balloons and laughed with family and friends during Relay.

Brandi said his medical prognosis is promising, and surgery was done to remove the tumor.

Joseph’s journey is like that of many others who attended St. John Parish’s Relay for Life, which offered food, activities and music in an effort to raise money to fight cancer and raise awareness of cancer prevention and treatment. Survivors, caretakers, community members and several businesses all gathered to soak in the sun and fun the event offered.

Relay For Life is the American Cancer Society’s signature activity, and local Relay days offer community members an opportunity to participate in the fight against cancer.

Individual teams will continue to raise funds, Cazenave said, adding the Relay committee will plan and host a Bunco night. Details for that event, as well as any others, will be updated on the Relay’s Facebook page at facebook.com/RFLStJohnLA.

Cazenave said donations can be made at relayforlife.org/stjohnla.

“We really want to thank all of our team members for their hard work, preparation and dedication to the cause,” Cazenave said.

“And thanks to the community for coming out and having a great time.”

All money raised by St. John Parish’s Relay is turned over to the American Cancer Society, which according to the organization’s website, uses Relay donations to fund research, provide free lodging to cancer patients, fund clinical trials and offer free 24-hour cancer support via phone.