Comets end season in Sulphur with loss to Brusly 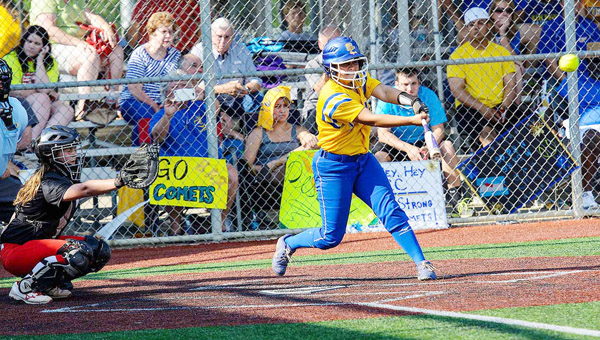 SULPHUR — St. Charles Catholic established an early lead in its return to Sulphur and Class 3A quarterfinal matchup with Brusly. But a deep and talented Brusly lineup keyed a rally, and in the end it meant the end of the Lady Comets’ season.

No. 7 seeded Brusly erased No. 2 seeded SCC’s 3-0 lead before eventually securing a 10-5 victory to advance to the Class 3A semifinals, where the Panthers fell to Kaplan, 7-6.

The Panthers (22-11) scored three runs in the second inning, then three in the fourth, one in the sixth and three in the seventh to record their 16th instance of scoring 10 or more runs in a game this season.

Akiya Thymes was key for Brusly at the plate, going 2 for 4 with two RBIs. Karli David went 2 for 2 while scoring two runs. Ariana Cipriano went 3 for 3 with two runs scored.

St. Charles (25-7) scored three runs in the bottom of the first inning, all coming on Brusly errors.

But the tide turned quickly. A St. Charles error in the second inning led to three Panther runs crossing to tie the game.

“We jumped up on top, but a big thing for us, always, is we say, ‘Don’t let them respond,’” St. Charles coach Ty Monica said. “But that’s what (Brusly) did. We misplayed a ball in the outfield. We had a throwing error. It’s one of those things that just snowballed.”

Brusly earned its first lead when David reached on an infield hit, leading to Brusly’s first run of the fourth inning. Gracie Trahan’s two-RBI single made it 6-3.

Each team added a run before the seventh, where Thymes doubled in two more runs.

Camryn Comeaux earned the victory for Brusly. She allowed six hits while striking out two and walking two.

“So much comes down to having that great week of practice, and honestly, we didn’t,” Monica said. “Tuesday and Thursday weren’t where they needed to be. It’s something that, hopefully, we’ll use as a learning experience.”

That said, Monica said this group of players was one of the most enjoyable and memorable he’s had to coach in any sport.

“They’re fun to be around,” Monica said. “They’re easy to coach, and every day they wanted to get better. Whatever goals they set for a day, they found a way to get it done.”