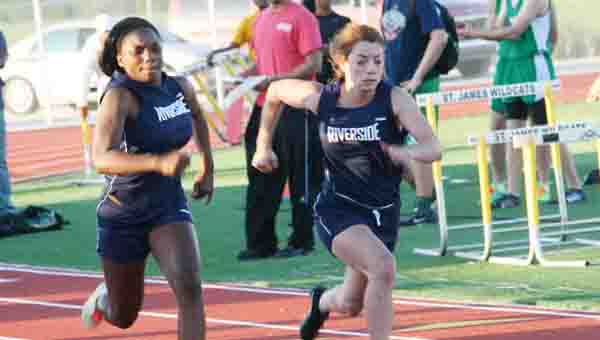 THIBODAUX — A number of strong East St. John individual performances at Wednesday’s Region III-5A championship meet will leave the Wildcats well represented at state on the boys and girls side.

The top three finishers in each event advance to the Class 5A track and field championship meet May 9 at LSU’s Bernie Moore Stadium.

The Wildcats boys 4×200 relay team of Javon Brown, Dontrell Allen, Jarrod Jackson and Demonte Coxie won the regional championship with a mark of 1:30.01.

In the field events, Demonte Coxie took third in the triple jump (6-01).

“We think we’ve got a few people who can place and stand up there (on the winners podium),” Creecy said. “They’ve been working hard and improving all year. We’re going to get up there and see how it goes.”

BELL, PERRIN, RELAYS HIGHLIGHT REBEL STATE QUALIFIERS — Rebels boys and girls each placed third at last week’s Region 3-2A meet as a number of Riverside athletes emerged as individual qualifiers for the Class 2A state championship track and field meet May 8 at LSU.

On the boys side, JuJuan Bell was the regional champion in the triple jump (41-09), while the 4×100 relay team of Darrion Cook, Kendall Martin, Bell and Von Julien emerged as the winner.