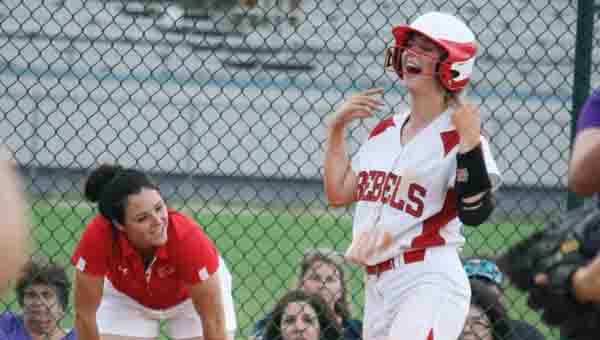 Riverside’s Hailey Tassin calls to her teammates and enjoys a moment with Riverside assistant coach Tori Sheppard during Friday night’s win over Fisher.

RESERVE — As the ball left the bat of Riverside seventh grader Lexi Johnson in the fourth inning of Friday’s Class 2A second round playoff game with Fisher, there was no doubt it was leaving the park.

So are the Lady Rebels, in fact — and they’re heading straight to Sulphur.

Second-seeded Riverside led 8-1 at that point and tacked on three more runs to wrap up an 11-1 victory over visiting and 15th seeded Fisher, propelling the Rebels to the state quarterfinals.

Riverside, winner of 16 straight games, will face No. 10 seed Many at noon Friday for the opportunity to play on the softball season’s final day.

The win over Fisher lasted five innings and was called by the 10-run rule.

Johnson collected two of Riverside’s 13 hits on the evening, going 2 for 3 with a home run, double and three RBIs.

“My team got me pumped up and it just made me want to hit it hard,” Johnson said. “I saw she threw two outside pitches and thought, ‘Here it comes.’ When I got back to the dugout and I saw everyone there and proud of me, it felt really good.”

“It’s really the best feeling in the world,” said Delaneuville, the Rebels’ senior shortstop. “A lot of people doubted us before the season. We went through a lot of change. Knowing people didn’t expect that much from us just made us want to work so much harder.”

Cheyenne Triche pitched the complete game for the Rebels (21-5), allowing one run on two hits, one walk and a hit batter.

After Triche drew three straight fly ball outs to begin the game, the Rebel batters went to work in their half of the first inning. Milioto drew a walk before Tassin doubled her home to make it 1-0.

In the second inning, Riverside’s Briley Becker singled with two outs to start a rally. Perrin singled to put two on for Caitlin Roussel, who earned RA’s third straight single and in the process plated two runs. Milioto and Tassin earned back-to-back singles, the latter’s base hit making it 4-0.

Delaneuville led off the third inning with a single, then Johnson doubled her home. Abby Bourgeois’ sacrifice fly RBI made it 6-0. Riverside barely missed a chance to expand the lead even more, but Milioto hit a hard line shot to Fisher third baseman Jamilyn LaCross — who made several similar strong defensive plays at third in the game for the Gators.

Johnson’s fourth inning blast followed a single by Madison Watson. Watson and Delaneuville each earned RBIs in the fifth to close out the win, Delaneuville’s a two-run single to officially end the game.

Many (18-8) tied for third place in a tough District 3-2A featuring Rosepine and fellow quarterfinalist Menard.

It will face a red hot Rebels lineup when the teams take the field Friday. Throughout Riverside’s 16-game win streak, it has scored 11 runs or more 12 times as the Rebels have proven themselves one of the state’s best lineups.

Delaneuville smiled when asked about the Rebels’ plans for Sulphur. She said her team will settle for nothing less than their ultimate goal.

“We are going to get a ring,” she said. “We’re all determined to get that ring. We’ve had a couple shots and come up short, and that’s ok. We’re going to finish it this year.”