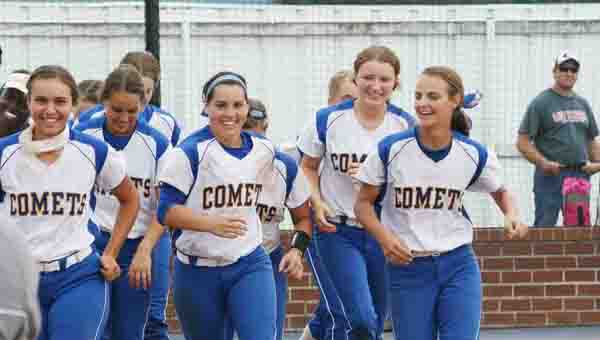 St. Charles Catholic players enjoy the moment after qualifying for the state softball tournament via their 6-1 victory over Caldwell Sunday afternoon. (Ryan Arena/L’OBSERVATEUR)

LAPLACE — After nine straight years of appearances at Sulphur for the state softball tournament, St. Charles Catholic narrowly fell short of that goal in 2014.

The second-seeded Lady Comets are headed back to what their players affectionately call their second “home,” after officially punching their ticket via a 6-1 home victory over No. 15 Caldwell Sunday afternoon.

“This was our goal and we’ve worked extremely hard to go back,” said St. Charles catcher Morgan Nobile, who earned two hits and drew a walk. “We got a good boost of confidence (Sunday) by getting that early lead and we were focused on playing really good defense all day.”

St. Charles will match up with former district rival Brusly at 2 p.m. Friday in the Class 3A quarterfinals at Frasch Park in Sulphur.

“(The goal) was to take this group of two seniors and a bunch of underclassmen back to Sulphur, so if nothing else they could experience the Mecca of softball, to walk inside those gates in their uniforms and experience that atmosphere,” Monica said.

“Now, how far we ultimately go is up to them. Are you just satisfied getting there, or are you ready to make a run? We’ll find that out this week.”

The Comets (25-6) shot out the gates quickly with three first inning runs, beginning things with Nobile’s bunt single. She stole second and third base before scoring on a wild pitch. Kaitlyn Lowry walked, stole second and later scored on Paige Williams’ RBI groundout. Caroline Julian reached on a dropped strike three ball and scored on another wild pitch.

Caldwell scored its lone run in the third inning after Bailey Coates walked and scored on a wild pitch.

But St. Charles added three more runs in the fourth inning to create some breathing room. Lela Hill and Pylar Zeringue each walked before Destiny Wesley made it 4-1 by cranking a single to the outfield. Nobile walked, then Julian doubled home two runs to make it 6-1.

St. Charles starter Jade Brady did not allow a hit in her 3.1 innings of work, but walked five. Kelsie Williams came on in relief to hold Caldwell scoreless over 3.2 innings. She allowed three hits, one walk and struck out one.

Caldwell threatened in the fifth and seventh innings, loading the bases in the former and getting two on in the latter before Williams closed the door.

Conner Stockstill took the loss for Caldwell, allowing six runs on four hits and eight walks. She struck out three.

Monica said he didn’t feel like the Comets truly clicked in any of the three major phases of the game, and said emerging with a decisive victory, nonetheless, was a testament to the players.

“I didn’t think we were at our best, not in terms of  our hitting, our pitching or our play defensively,” he said. “It says a lot to be able to win 6-1 when that’s the case … For a lot of these girls, it’s the first taste they’ve had of a playoff game of this magnitude, a second-round opponent and a chance to go to Sulphur. We tried to stress before this that our opponent was Caldwell, and not Sulphur. Treat it like a normal softball game despite there being a little more on the line.”

The last time the two teams squared off in the postseason, Brusly defeated St. Charles  7-4 in the Class 3A quarterfinal round in the 2012 season.