‘Beauty and the Beast’ production running this week in Reserve 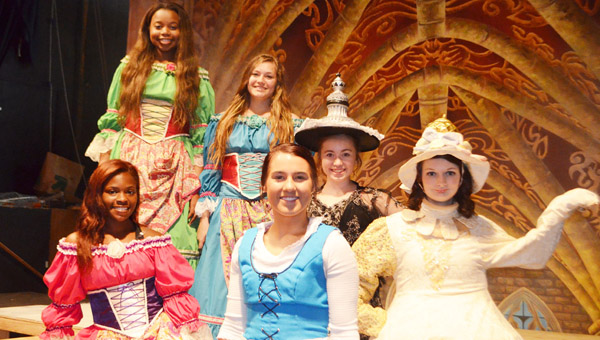 RESERVE — It was at a Saenger Theatre production of “Annie” that Alyssa Mulkey knew she belonged on stage.

The Riverside Academy student was inspired.

“I figured if I had instruction then I could land a lead role as well,” she said.

“I felt optimistic and knew I had potential. If I didn’t get a lead part, then I could still shine in whatever part I received.”

Mulkey took that ambition to school auditions and landed the title role of Belle in Riverside Academy’s production of “Beauty and the Beast.”

Based on the smash hit 1991 Disney film and dating back to a late 18th-century classic French fairy tale, “Beauty and the Beast” tells the story of Belle, a beautiful and intelligent young woman who feels out of place in her provincial French village.

When her father is imprisoned, Belle’s attempt to rescue him leads to her capture by the Beast, a grisly and fearsome monster. The only way for the Beast to become human again is if he learns to love and be loved in return.

Mulkey said she has gained a greater appreciation for the story as the rehearsal process progressed.

“I love that Belle is an independent woman who doesn’t need a man and stands up for what she believes in,” Mulkey said. “She sees the inner beauty and the inner ugly, for that matter, in everything.”

“We strive to do stories that will inspire more students to become involved in live theater,” he said. “In addition, the story has such a universal message of acceptance that many students can relate. Both Belle and Beast feel like outcasts and are yearning for acceptance. Combined with the themes of second chances and beauty not being only skin deep, students and audience alike have much to which they can relate.”

Clement said “Beauty and the Beast” is a challenging production for a small drama program with many novices, but added members of the cast and crew would cherish the experience of facing those challenges head on for the rest of their lives.

An additional challenge this year included Clement rupturing his Achilles tendon and the students rehearsing for several weeks without his assistance.

“Audiences should expect a beautiful show filled with the hard work of these young talented students, extravagant costumes and exquisite sets,” Clement said. “At Riverside Academy, I strive to give the drama students the complete theater experience by using professional sets, costumes, etc. I invite children of all ages to ‘Be Our Guest’ at our spring production of ‘Beauty and the Beast.’”

Matt Tregre said he saw the role of Beast as a challenge to his capabilities on and off the stage.

Because it is third year in a Riverside production; however, he is ready for his first challenge as a main character.

“My favorite part of the play is when I transform from the Beast to the prince, because it’s not what someone looks like, it’s the beauty inside of a person,” Tregre said.

Show times at St. John Theatre are 7:30 p.m. today, Thursday and Friday, and the box office opens an hour before show time.

Tickets for the reserved seating shows are $10 and can be purchased at Riverside Academy or at the theater.