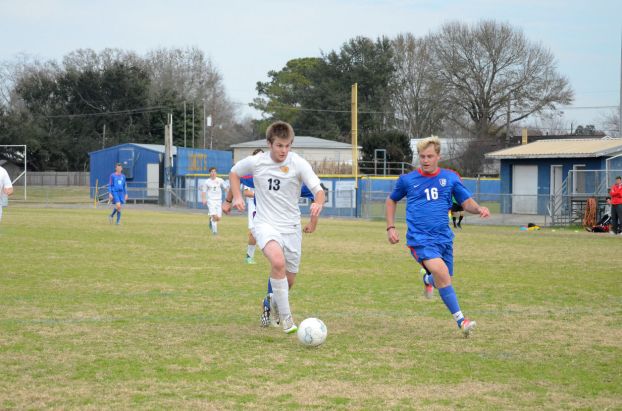 OPELOUSAS — St. Charles Catholic saw one of the best seasons in team history on the brink of ending Wednesday at Westminster. The Comets decided to do something about it.

After falling behind 3-1 in the first half, SCC scored five unanswered goals after halftime to advance to its first state quarterfinal game since 2008, earning a 6-3 victory in the regional round of the Division III state soccer playoffs.

Westminster, the No. 8 seed, scored the first two goals of the day, but couldn’t stop a Comets attack led by Albert Hane, who put four goals home in the victory. Hane now has scored 36 goals this season.

The No. 9 seeded Comets will travel to face No. 1 seeded St. Louis today at 2 p.m. St. Louis defeated No. 17 seed Holy Savior Menard, 4-0, in the regional round to advance. Because St. Louis traveled to play its regional match, SCC plays on the road.

Andrew Rodrigue and Evan Simoneaux each scored goals as well for St. Charles (14-4-3).

“To get to the quarterfinals and have it be in that manner, it’s just a great thing for our boys to experience,” St. Charles coach Sean LeBlanc said. “At halftime, we changed our tactics. (Westminster) was too fast for us given the defense we were playing. We occupied space deeper and made the field bigger, in effect. Then we went after them (offensively).”

It was another dominant effort by Hane, who has six goals scored in two playoff games.

“He did very well playing off the ball,” LeBlanc said. “Sometimes, that’s been his downfall. But there was a lot of movement and communication, and he really came through.”

Westminster started fast, scoring within the first five minutes of play before taking a 2-0 first half lead. Hane got SCC on the board with his first goal to make it 2-1 late in the half. The Comets missed a chance to tie things up before half when they didn’t convert a free kick on a penalty, and Westminster threatened to take the momentum for good when it booted a goal to make it 3-1 before half.

“That PK we missed in the first half was a missed opportunity, and they hit with a wicked shot to put us on our heels,” LeBlanc said. “We had to regroup at half.”

The coach said he didn’t raise his voice at half, as he saw a group of Comet players who needed to calm down.

“Compose yourselves, and let’s go fight,” LeBlanc said. “Let’s finish strong. And they came out like gangbusters.”

Hane’s second goal got SCC rolling after the break. Then Simoneaux gave his team new life by socking home his own score, tying things up 3-3.

Two more Hane goals not only put SCC ahead, but gave the Comets breathing room. Rodrigue made a penalty kick for a three-goal lead, and SCC was on to the next round.

LeBlanc knows his team has a stiff challenge when it heads to Lake Charles to face a St. Louis program that’s won 10 state titles, including four straight from 2010-2014.

He also said his team can’t — and won’t — put emphasis on playing against history.

“The biggest thing for my guys is the mentality they have,” LeBlanc said. “Understanding they’ve earned this and deserve to be there, and no matter who you play or where, it’s more about how we play than the opponent. That’s to take nothing away from St. Louis, a wonderful team. But we can’t let this be bigger than it needs to be.”