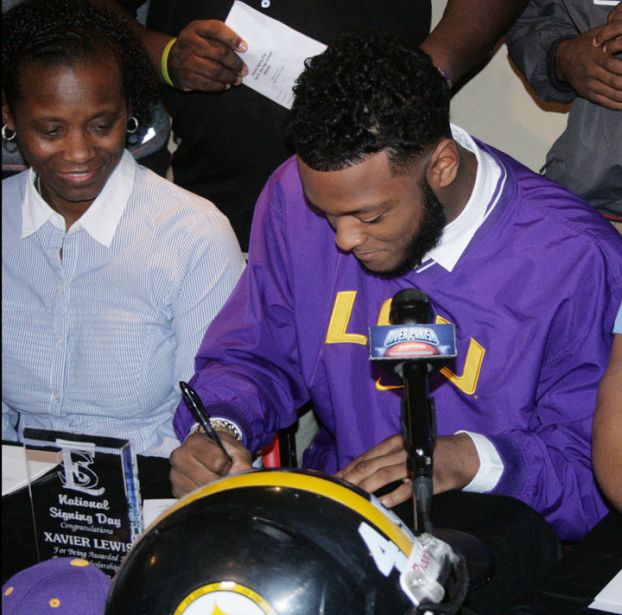 RESERVE — The smile of East St. John’s Nigel Anderson lit up the room at Fatty’s Restaurant in Garyville. His dream was coming true.

And he was far from the only one that could say so on Wednesday’s National Signing Day.

The Tulane commitment made it official, along with seven East St. John teammates, at a special signing ceremony at Fatty’s.

Thirty River Region players in all signed scholarships to play football and continue their education at the collegiate level. Twelve of those players signed with FBS schools, seven of them with those in Power 5 conferences.

“It’s special,” said Anderson, a bruising tailback who chose Tulane over offers from East Carolina, Louisiana Tech, Louisiana-Lafayette, Southern Miss, Washington State and Western Kentucky, among others. “I felt like I could have gone anywhere. I chose Tulane, because I felt, ‘Why leave my family?’ I know I’ll continue to have their support, and I’m going to keep supporting my home region.”

Anderson becomes part of what has become a tradition for the Green Wave, which has snagged a Wildcat on each of the past four signing days. Anderson joins former ESJ standouts Darion Monroe, Leonard Davis and Darren Williams on the Tulane roster.

Lewis, an electrifying player who mostly played at quarterback for East St. John, was an early commitment for the Tigers in 2013. He also played receiver, punter, kicker and returned punts and kicks — as well as cornerback, which is where he’ll play for the Tigers.

He said it’s up to him to make the most of his early opportunities.

“I have to grab it,” he said. “They’re going to present me a chance and I have to run with it.”

Parks said Arizona was “amazing” and was one of several players to thank former ESJ coach Phillip Banko, who coached this senior class through the entirety of their run.

“I want to be a game-changer (for Arizona),” Parks said. “I like the coaching staff, really, everything about Arizona, and I can’t wait.”

Bartholomew, L’OB-SERVATEUR’s selection as 2014 St. John Parish Offensive MVP, is one of the highlights from a strong River Parish presence in the first recruiting class of new Nicholls coach Tim Rebowe, the former head coach of Destrehan.

The 6’4” wideout said he would have never expected football to be his ticket to the next level; also a standout basketball player, Bartholomew broke out late in his junior season on the football field.

“No, it just kind of happened like that,” he said with a smile. “I’m ecstatic. I liked everyone from the coaching staff to the players. I’m really looking forward to the atmosphere.”

Nathan, who chose Grambling after a hotly contested recruiting battle with Southern, said he’s likely to play a similar role to what he did at WSJ, as a nickel back/linebacker hybrid.

“It feels good,” Nathan said. “Playing here for five years, (WSJ) helped me become a better person. They made me a better man. We’re a family here.”

Taylor said Louisiana College “felt like home” and that he was happy to be heading there with a slew of Ram teammates.

That includes Borne, the latest Rams’ tailback standout, who said he “never thought he’d be playing college football,” and credited Rams running backs coach Patrick Jackson for being a huge part of his development.

Riverside had a sendoff of its own at the Rebels’ gym, as defensive line cornerstones Joe Anderson (Copiah-Lincoln Community College/Ole Miss) and Richie George (Iowa Western Community College) signed on the dotted line.

Iowa Western played for the Junior College championship last season, and that appealed to George, the Rebels’ mammoth tackle.

“I like to win and I hate to lose,” George said.  “I told (the Iowa Western coaches) I like to grind it out, and I think they liked that.”

Anderson plans to attend JUCO Copiah-Lincoln before making the jump to Ole Miss.

“I always wanted to go to a big school,” Anderson said. “Even though I knew I’d be going to a junior college first, I wanted to sign early to show them I care. They’ve been showing a lot of love with me, so I wanted to show (Ole Miss) the same.”