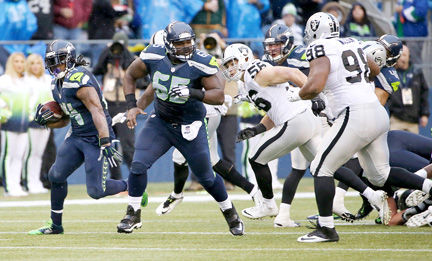 “I don’t know how many high schools out there can say they’ve got two guys with Super Bowl rings,” Dauterive mused. “Ryan Perrilloux got one a few years ago with the New York Giants, and this weekend might be Patrick’s turn.”

The “Patrick” he notes is Patrick Lewis, a former ESJ standout currently preparing to take the field with the Seattle Seahawks, who will take on the New England Patriots in Sunday evening’s big game.

Lewis started four games this season after joining the Seahawks, who suffered injuries at the center position.

While he is not expected to start Sunday, Lewis says he is ready if needed — and is living a dream whether or not he is called upon.

“It’s exciting,” Lewis told L’OBSERVATEUR. “When we won (in the NFC Championship game), that crowd went crazy. That place was jumping. Now, to be a part of a Super Bowl team, and everything that goes with it. It’s really cool.

“At the same time, none of us are satisfied. We won’t be until the end of that game. We’ve got one goal.”

By all accounts, Lewis has always been driven by such goals.

Lewis Sr. said his son decided early on the gridiron was where he wanted to make his living.

“He said, ‘I want a career doing this, as long as my body will allow me to do so,’” Lewis Sr. said. “I’ll tell you what, too, I knew when he was very young he was going to make some waves.

“When he was in the nursery as an infant, the doctor told me Patrick was the only one strong enough to lift his head up and look around at everything. He was always country strong, almost freakishly strong.”

Lewis’ grandfather played collegiate football at Southern, while Lewis Sr. was also a strong athlete. The latter admitted he didn’t have the grades to play at the next level, but “it was never a problem for Patrick,” noting his son was an honor student at East St. John and graduated with honors from Texas A&M.

At East St. John, Lewis quickly found a fan in Dauterive, who has steadfastly called him the best offensive lineman he’s ever had. Lewis was a defensive player as a freshman, but Dauterive saw a different path for him.

“He just had something about him,” Dauterive recalled. “His size, his stick-to-it-iveness, his smarts. Everyone wants to play defense. Offensive line, you’re anonymous.”

Lewis did stand out. He earned All-State honors in each of his next three seasons, playing offensive tackle and guard.

“Coach Dauterive would move him around, we’d know where the ball was going, and we couldn’t stop it,” said Stephen Robicheaux, coach of ESJ district rival Destrehan. “He’s undoubtedly one of the best we ever played against.”

Dauterive recalled two specific ESJ games where Lewis made a major mark: a Wildcats’ victory in six overtimes over Hahnville, and a loss to Bastrop and All-American defensive tackle Josh Downs.

“In that sixth overtime, we just ran Alex (Singleton) behind Patrick, time and time again,” Dauterive said. “We won the game on their backs. Patrick was our security blanket.”

Against Bastrop, Dauterive moved Lewis inside to deal with Downs.

“We lost that game, but I can promise you, it wasn’t due to Patrick,” Dauterive said. “He wore Josh Downs out that night.”

Dauterive and Lewis Sr. noted Lewis had his share of doubters through the years from those believing Lewis’ height would ultimately derail his dream of playing professionally.

“I’m so glad to see him have this kind of success, because he had to push through a lot,” Lewis Sr. said. “I never doubted his talent or drive. But there were people who thought, because he’s just 6’, teams weren’t going to want him.”

And look at him now.

“He’s going to play a long time,” Dauterive said. “One of those guys who can play 10, 12, 13 years in the league. When you can play multiple positions on the line, it’s sure hard for them to cut you. Only 106 players get to walk onto that field Super Bowl Sunday. And wouldn’t you know it, Patrick Lewis is one of them.”