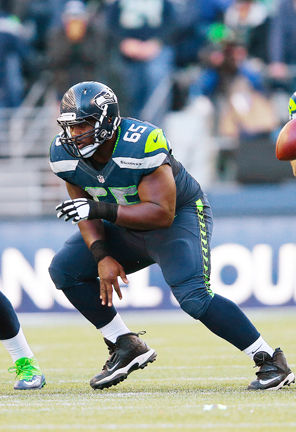 Q – What music gets you hyped pregame? You know, I used to listen to my I-Pod. Some Lil Boosie, a little Rick Ross. Now, it’s different. I try and enjoy the moment. I find energy in my teammates versus listening to music.

Q – Who is the funniest guy on the Seahawks? We’ve got a bunch of clowns. Michael Bennett’s up there. Christine Michael. It’s hard to pick just one out, honestly.

Q – Who is the nastiest defensive lineman you’ve ever faced? Gerald McCoy. My freshman year at Texas A&M, we matched up with Alabama. He had a combination of speed and quickness I hadn’t seen from anyone, ever.

Q – What was the last movie you went and saw? The Equalizer. I’m not a big movie guy, usually. We saw that one recently, though.

Q – Living in Seattle, what do you miss most about home? The food. The food and my family, for sure.

Q – What’s the coolest thing about coach Pete Carroll? His understanding of his players. He’s got a knack for getting the very best out of you and he makes coming to work fun. He has that drive in him, and it makes you want to fight for him.

Q – What was the most memorable game you’ve ever been a part of? I have to say, it’s that NFC Championship (win over Green Bay). That building was rocking. Everyone just kept fighting and refusing to lose faith. It was amazing to be a part of.

Arena: So, anyway … who the heck wins this game?

With Super Bowl Sunday upon us, we can perhaps finally put to rest talk of deflated footballs and scandal and... read more