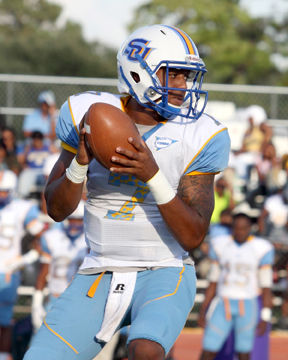 Austin Howard didn’t take long to make an impact in his freshman football season at West St. John in 2010, starting at quarterback for much of the year to cement himself as the successor to former Rams passer Dray Joseph. Howard went on to have a wildly successful prep career, following in Joseph’s footsteps.

He seems primed to do the same at Southern.

As a true freshman, Howard secured his position as starting quarterback of the Jaguars during the season and held on for good, culminating in his earning MVP honors in the Bayou Classic, leading his team to a 52-45 victory over Grambling in a shootout. Howard passed for 258 yards and three touchdowns in the victory, at one point captaining Southern to a 31-10 lead via scoring passes of 13, 45 and 55 yards.

It was not the first success Howard had tasted during the season. He was named the Southwest Athletic Conference’s Freshman of the Year, as well as earning honors as a finalist for the Jerry Rice Award and the Boxtorow.com Rookie of the Year.

Ironically, much like he did at West St. John, he again succeeds Joseph, who left Southern as its all-time leading passer.

One man who isn’t at all surprised at Howard’s early success is West St. John football coach Robert Valdez, who led the Rams during the entirety of Howard’s run as starter and in Joseph’s senior season.

“Austin’s one of those guys that, whatever ‘it’ is, he has ‘it,’” Valdez mused. “If I could bottle it and sell it, I’d be a rich man. He has that confidence, that swagger, and the smarts to play the position at a high level. He picks up things extremely quickly.

“And he wouldn’t admit it, but he plays with a chip on his shoulder.”

That chip comes, Valdez says, from a recruiting process that left Howard largely overlooked, despite leading West St. John to one state championship game and two semifinal appearances, and perennially triggering one of the highest scoring offenses in the state.

“People doubted him because of his height, and people doubted him for playing at a small school,” Valdez said. “Austin and I would be sitting in this office, and I’d just say, ‘Hey, OK, we’ll just keep proving everyone wrong.’ A lot of people get caught up in the numbers and miss players with his kind of heart and competitive spirit. I didn’t understand it.”

Neither, he said, did Howard.

“In Austin’s mind, he’s the best,” Valdez said. “He loves to compete. He was the same way in baseball. Some people shy away from the pressure. Austin’s wired the other way. He loves being on center stage.”

His arm strength, mobility, and perhaps most importantly, his quick breakdowns of coverages and checks at the line were a big reason the Rams were able to seamlessly move from a “three yards and a cloud of dust” type of offense to a shotgun spread, no-huddle attack.

“We saw what he was capable of, and we wanted to put more and more on his plate to take advantage of those rare skills,” Valdez said. “Being the guy who makes those calls in our offense, to check into and out of plays and quickly recognize what puts us in the best position … and he made it easier on his teammates. He’d make up terms and calls to make it easier for his linemen to remember checks.

“In all his years here, I don’t ever recall Austin missing practice. Not one day. He truly loved being out here. He’s the type of player that doesn’t come around every year.”

Valdez credited Juan and Dray Joseph as being major influences in Howard’s development. Juan Joseph, who passed away tragically in late November, was Howard’s quarterback coach at West St. John, and continued as a valued mentor of his until his passing. Dray, meanwhile, was a student-assistant who worked with the quarterbacks at Southern last season.

From that mentoring, Howard has learned not just the lessons taught, but to teach lessons. Valdez notes Howard has come back to visit West St. John and has helped the development of current Rams passer Jemoine Green — who led the Rams to a fourth straight state semifinal appearance last season.

A Southern Jaguar alumni himself, Valdez has been somewhat spoiled — a number of Rams have moved on to play at his alma mater, and two of his former passers have dominated the quarterbacking reps there.

“It’s certainly special,” Valdez said. “I brought my family out to see the Bayou Classic this year. And Austin put on a show for us.”