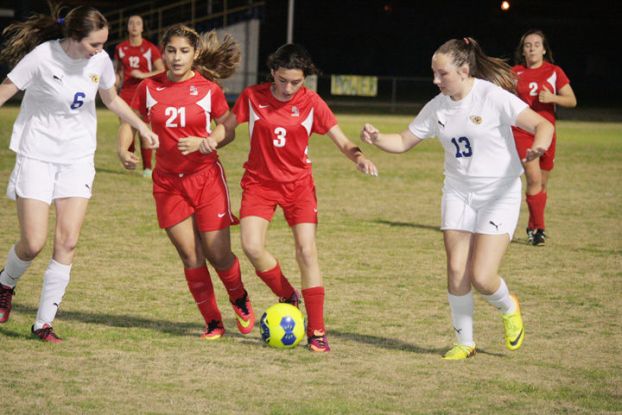 LAPLACE — After Riverside defeated St. Charles Catholic 6-0 in the first district meeting between the Lady Rebels and Comets, the two teams met again Tuesday evening — and SCC was determined to put forth a better showing in front of their home fans.

The Comets did just that, but in the end the Rebels still emerged the victor, this time by a 3-0 score highlighted by goals scored by Caitlin Roussel, Maddie Duhon and Paige Bivona.

The teams were tied for the first 14 minutes of play before Roussel leaked out ahead of the defense and scored to make it 1-0.

Then Duhon made an impact when she drew a penalty and earned a free kick from 20 yards out. She booted a high ball that sailed over the heads of a Comets wall of defenders and goalkeeper Jasmin Stipe and into the net to make it 2-0 with 15 miutes left in the first half.

“For us, we’ve been struggling a little in the beginning of games,” Duhon said. “It’s always a slow start, as if we’re not focused. We’re able to learn the weaknesses and strengths of our opponent as the game goes on and we start to get going.”

Duhon said the free kick was something she’d been practicing, and she was eager to put those skills to use once the opportunity arose in the game.”

“I just wanted to get one of those in a game,” Duhon said with a smile. “I honestly kind of shocked myself when I got it to go.”

Riverside (7-6, 2-2) added its third score when Bivona made a high-arcing kick from distance with 16 minutes left to play in the second half.

“I thought Paige did an outstanding job for us all night, and stepped up with a really nice shot for that third goal,” Riverside coach Mert Deger said.

St. Charles coach Travis Trepagnier was pleased with the improved defensive effort his team put forth, crediting Riverside for taking advantage of the opportunities that were there.

“It feels like our players are starting to believe they’re the team we think they are,” Trepagnier said. “Riverside had a lot of seniors stepping up for them and coming through in big spots. But we did a lot of things right. I felt like Riverside capitalized on the chances they had, and we didn’t. That was the difference.

“But if we continue to play like this for the rest of the season, I feel like we can string together a few more wins.”

Deger said the Rebels played a bit tentative at times, but did enough to win.

“They played a lot better than the (previous) three times we’ve played them.”

One thing that’s been consistent for Riverside throughout the season — even during a recent three game losing streak — is its defense, which has proved stingy against almost all foes.

“That comes down to our communication,” Duhon said.

“Our more experienced players want to set the example and make sure we’re all on the same page at all times. It goes a long way.”

Trepagnier was optimistic about the Comets (5-10-2) upcoming slate of games and credited senior Sarah Clawson as bringing steady senior leadership all season.

Meanwhile, freshman defenders Bria Sosa and Lauren Douroux are two players he believes will be among the central core of a team with a bright future.

“They’re really going to help us down the line,” he said. “With those two in the middle, we should be in pretty good shape.”

By RYAN ARENA L’Observateur RESERVE  — After a pair of recent losses, the Rebels bounced back to win two shutouts,... read more