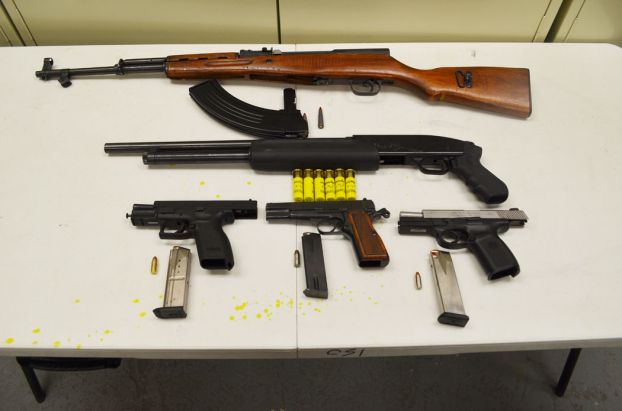 LAPLACE — Guns, gloves and ski masks were recovered during two separate traffic stops in LaPlace early Wednesday morning, leading to the arrests of seven men ranging in age from 17 to 33.

St. John the Baptist Parish Sheriff’s Office deputies responded to the 200 block of Chad B. Baker Street in Reserve at 1:08 a.m. Wednesday following an anonymous call and report of gunshots in the area.

The caller said two vehicles, a white Durango and a gray Charger, were speeding down the street toward River Road. A responding unit saw vehicles matching the descriptions and followed them east on Airline Highway to the Belle Pointe Subdivision, where the vehicles went two different directions, Tregre said.

During interviews with detectives, Tregre said the subjects, none of whom claim St. John Parish addresses, gave detectives conflicting stories about why they were on Chad B. Baker Street.

Detectives recovered dark colored ski masks and gloves from both vehicles, Tregre said, adding additional charges are forthcoming pending further investigation and no property or person was reported as being shot.

Based on the findings of the investigation, Tregre said detectives arrested and booked seven of the nine detained men.

“It was very good police work on patrol,” Tregre said of the arrests, adding continued tips and calls from residents will make the parish safer.

Alvon Jones, 20, of 8313 Waco St. in Metairie was arrested and booked with illegal use of weapons or dangerous instrumentalities and a violation of parole/probation. He remains incarnated in lieu of a $50,000 bond.

Devanta Powell, 21, of 2312 Fazzio Road in Chalmette and Charles White, 23, of 2742 Richland St. in Kenner were each arrested and booked with illegal use of weapons or dangerous instrumentalities. They each remain incarnated in lieu of a $50,000 bond.

Sgt. Dane Clement said the clause means 10 percent of the bond couldn’t be posted for release, unlike other bonds. He said the bond option is discretionarily used by the judge who sets the bond, and is typically attached in personal, violent crimes.