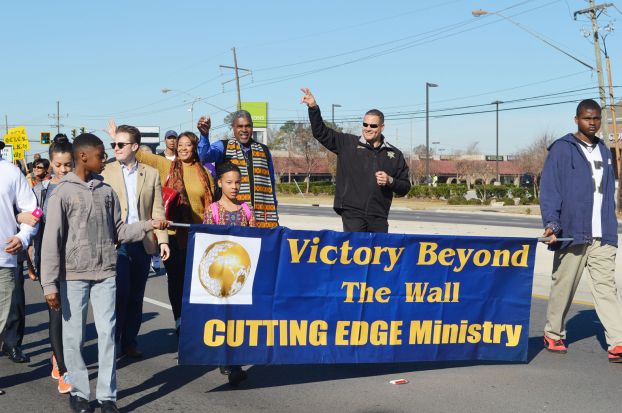 MLK speaker: What is our dream?

LAPLACE — A local man who in 1997 bought the plantation five generations of his family spent living and working on as slaves was the keynote speaker Monday at St. John the Baptist Parish’s 22nd annual Martin Luther King Jr. Rally Program in LaPlace.

The life of King — a clergyman, activist and prominent leader in the Civil Rights Movement who advocated a non-violent approach against segregation and racial discrimination — was honored and hundreds of people took to the streets in commemoration during the march and rally where St. John Parish native Carl Baloney addressed the crowd as the guest speaker.

Baloney, general manager of Baloney Funeral Home and Broussard Baloney Law Firm, encouraged all generations in attendance to honor King’s legacy with having dreams of their own.

“Today we must ask ourselves, ‘what is our dream?’”

Baloney said his grandfather, who was born on a plantation and illiterate, never accepted that station in life and dreamed of more for his children and grandchildren.

Because of his father, Baloney said, “I felt empowered to have a dream of my own.”

He called his father a visionary, and said he owed his present success to the upbringing and work ethic his father instilled in him.

“I encourage you to have a dream, to expect adversity, to persevere …and take steps to make that a reality,” Baloney said.

Nearly 20 years ago Baloney and his wife Geri purchased Emilie Plantation, an affiliate of the very plantation his family once lived and worked on as slaves.

Bering organized and founded the first parish Martin Luther King Day March and Rally in 1993 as part of Bethlehem Missionary Church’s Victory Beyond The Walls outreach.

A Monday march and ceremony was held in Edgard as well.